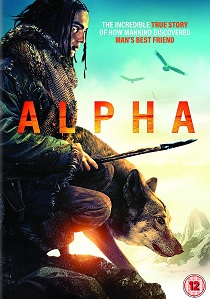 Alpha, released on DVD and Blu-ray 9th January 2018 from Sony Pictures Home Entertainment, is an epic adventure set in the last Ice Age.

While on his first hunt with his tribe's most elite group, a young man is injured and left for dead. Awakening to find himself broken and alone, he must learn to survive and navigate the harsh and unforgiving wilderness.

Reluctantly taming a lone wolf abandoned by its pack, the pair learns to rely on each other and become unlikely allies, enduring countless dangers and overwhelming odds in order to find their way home before the deadly winter arrives.

Related Articles
Slow West, Bad Land: Road To Fury, The Congress, Dawn of the Planet of the Apes, Romeo & Juliet, Paranorman, Let Me In, The Road, X-Men: Dark Phoenix, Chronical: 2067, The Power Of The Dog: The Criterion Collection
Vikingdom, In The Name Of The King: Two Worlds
Blade 2, Goal 2: Living The Dream, Blade 2, An Elephant's Journey
The Book Of Eli
Comments
BD Releases News Pick