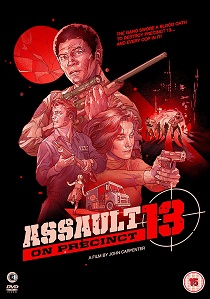 Assault On Precinct 13 is a film that truly defines the phrase cult film... From low budget roots, it has become acclaimed as not just one of the most successful independent releases ever, but also one of the most groundbreaking. The film helped catapult director John Carpenter (Halloween, Escape From New York), into the mainstream and also launched a million and one synth-heavy scores and soundtracks. Its influence is still felt as keenly today as it was on its release some 40 years ago.

To celebrate the 40th Anniversary of this seminal film, Second Sight is delighted to announce the release of a newly restored high definition version from a 1080p transfer. It will be will be presented in a stunning limited edition Blu-ray box set, packed full of brand new special features including an early John Carpenter student short, as well as the original soundtrack CD and art cards, and is set for release on 28th November 2016, alongside a DVD version.

An LA gang's revenge-fuelled killing spree leads them to a half-abandoned police station in the throes of closing down. Under siege with power and phone lines cut, lone cop Ethan Bishop (Austin Stoker - Battle for the Planet of the Apes), and his skeleton staff, including two secretaries (Laurie Zimmer - A Dirty Story; Nancy Loomis - Halloween), recruit a condemned killer from the cells in a desperate battle to survive the night. As the gang close in the tension escalates to boiling point in this brutal and unrelenting cult classic.