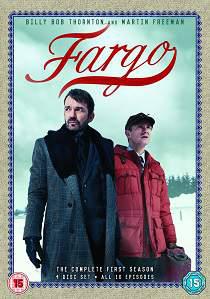 Nominated for no less than 18 Emmys, don't miss one of this year's most talked-about TV series when Fargo - Season 1 is released on Blu-ray and DVD on 22nd September 2014, donchya know.

An original adaptation of the Academy Award®-winning feature film, the Fargo TV series benefits from the influence of the infamous Coen brothers (Fargo, No Country for Old Men) who are on board as Executive Producers.

Fargo - Season 1 follows a new case and new characters, all entrenched in the trademark humor, murder and "Minnesota nice" that made the film an enduring classic. Oscar winner Billy Bob Thornton (The Man Who Wasn't There, Bad Santa) stars as Lorne Malvo, a rootless, manipulative man who meets and forever changes the life of small town insurance salesman Lester Nygaard, played by BAFTA Award winner and Emmy nominated Martin Freeman (Sherlock, The Hobbit: An Unexpected Journey). Colin Hanks (Dexter, King Kong) plays Duluth Police Deputy "Gus Grimly", a single dad who must choose between his own personal safety and his duty as a policeman when he comes face-to-face with a killer.

Fargo on DVD and Blu-ray features new content including audio commentaries and deleted scenes. Relish the longer evenings with your copy of Fargo, on Blu-ray and DVD this autumn.

BD
Adapted from the classic novel by Charles Dickens, The Personal History Of David Copperfield, released on DVD and Blu-ray 15th June 2020 from Lionsgate Home Entertainment, brings to life one of the ... END_OF_DOCUMENT_TOKEN_TO_BE_REPLACED
Hot PicksView