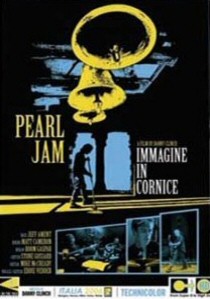 Pearl Jam announces the release of Immagine in Cornice "Picture in a Frame" (Monkeywrench Records), a live concert film chronicling the band's performances with behind-the-scenes footage from the five Italian concerts that took place as part of the band's 2006 European tour. Featured cities and venues include: Pala Malaguti in Bologna, the Arena di Verona, the Forum in Milan, Palaisozaki in Torino and Duomo Square in Pistoia, Italy.

Immagine in Cornice was directed by renowned photographer, filmmaker and long-time friend of the band Danny Clinch (Bruce Springsteen Devils and Dust, Live from Bonnaroo 2004) and was shot in Super-8, High Definition and a number of formats in between.

"'Picture in a Frame' is a film I've really wanted to make", says director Danny Clinch. "The band invited me to Italy and gave me the access I needed to show a side seldom seen by their fans. It has become a collaboration, as well - the band even offered me some music that has never been heard and Mike (McCready) went into the studio to create some more music for the soundscapes. This is a look at Pearl Jam that no one has seen yet. A trip through northern Italy with the band, thru the document and thru abstraction."

Immagine in Cornice captures prime stage versions of songs spanning Pearl Jam's career -- ranging from Even Flow to Corduroy to World Wide Suicide, and gives fans a behind-the-scenes perspective of the band's travels through Italy -- from their first stop in Bologna to their final show in Pistoia. Personal interviews, candid performances, and glimpses backstage and off stage provide a rare look into the band's life on the road.