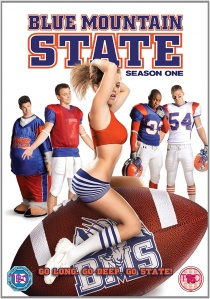 Blue Mountain State is the rudest, crudest comedy ever to hit the field. The complete first season arrives on DVD following a successful airing on MTV and coinciding with Season two (currently on air). This ram-packed two-disc set is available on 22nd August 2011 and is released by Lionsgate Home Entertainment.

Three football-mad freshmen arrive to a big-time, mid-western college. Will they be able to juggle football, girls, lessons and non-stop partying? Touch down with our three jocks

Alex is a talented quarterback who is content to just sit on the bench and party with his best friend. Sammy aspires to be nothing more than the school's mascot. Craig is meant to be the good guy and has his life already mapped out for him by a controlling girlfriend. Welcome to the hilarious Blue Mountain State!

UHD
A 13-year-old girl named Meilin turns into a giant red panda whenever she gets too excited in Disney and Pixar's 25th feature film Turning Red, released on DVD, Blu-ray and 4K UHD 2nd May 2022 from Walt Disney Home ... END_OF_DOCUMENT_TOKEN_TO_BE_REPLACED
Top PicksView