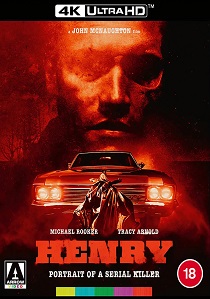 NewsDramaCrimeArrow
News Article Go back to homepage
A new 4K restoration supervised by the director himself, widely heralded as one of the greatest serial killer movies of all time, Henry: Portrait of a Serial Killer is released on 4K UHD 18th April 2022 from Arrow Video.
Michael Rooker, Tracy Arnold, Tom Towles, David Katz
John McNaughton
Lisa Dedmond, Steven A. Jones, John McNaughton
Arrow Video
1 hour 23 minutes
18/04/2022
#HenryPortraitOfASerialKiller
Thank you for supporting DVD365.net when you order using the link(s) below. As a member of the Zavvi affiliate program we earn from qualifying purchases
Buy UHD
Information

Widely heralded as one of the greatest serial killer movies of all time, Henry: Portrait of a Serial Killer presents a bleak and unflinching dive into the mind of a mass murderer.

Hiding behind his unremarkable employment as a pest exterminator, Henry leads a double life, prowling the streets by night on a brutal and apparently motiveless killing spree. As the bodies mount up, Otis finds himself inducted into Henry's dark secret world, but when Otis' sister Becky (Tracy Arnold) moves in, herself fleeing from an uncomfortable domestic situation, it quickly becomes apparent that two's company, but three's a crowd.

Based on the horrific true-life crimes of Henry Lee Lucas, the harrowing controversial debut feature from John McNaughton (Mad Dog and Glory, Wild Things) returns to the UK 18th April 2022 in its best-looking release ever, in a new 4K restoration supervised by the director himself.