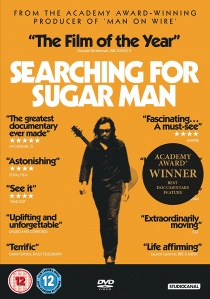 Malik Bendjelloul's revelatory and compelling Searching for Sugar Man (USA/UK/Sweden) is a documentary about the Mexican-American singer-songwriter Rodriguez, who was momentarily hailed in 1970 as the finest recording artist of his generation and then disappeared into oblivion - only to rise again from the ashes in a completely different context, a continent away. Searching for Sugar Man is a film about hope, inspiration and the resonating power of music, released on DVD and Blu-Ray by StudioCanal on 27th December 2012.

In the late '60s, a musician was discovered in a Detroit bar by two celebrated producers who were struck by his soulful melodies and prophetic lyrics. They recorded an album that they believed was going to secure his reputation as one of the greatest recording artists of his generation. In fact, the album bombed and the singer disappeared into obscurity amid rumors of a gruesome on-stage suicide. But a bootleg recording found its way into apartheid South Africa and, over the next two decades, it became a phenomenon. Two South African fans then set out to find out what really happened to their hero. Their investigation led them to a story more extraordinary than any of the existing myths about the artist known as Rodriguez.

It's a film about hope, inspiration and the resonating power of music and that music can be heard on the Original Motion Picture Soundtrack, available now through Sony Legacy Recordings and Light In The Attic Records. Comprising tracks from Cold Fact and its 1971 follow-up Coming From Reality (reissued to critical acclaim in 2008 and 2009, respectively), the soundtrack begins with the otherworldly Sugar Man and acts as a primer to this long-overlooked musician's fusion of gritty funk, political poetry and blissful psych-folk.

Rodriguez's recently rediscovered back catalogue is packed with social commentary, brilliant tunes and, in the case of his 1970 album Cold Fact - a genuine psychedelic classic. To see these songs performed by the man himself, catch a rare performance this winter as part of the Rodriguez full UK Tour Winter 2012.