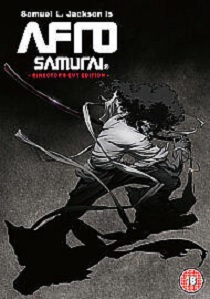 NewsTV SeriesScience FictionActionSamuel L. Jackson
News Article Go back to homepage
Samuel L. Jackson has a penchant for an Afro and for Sci-Fi so what could be better than mixing the two? Jackson lends his voice to two of the lead characters in the beautifully animated Afro Samurai, out on DVD on 15th October 2007 from Studio Gonzo.
John DiMaggio, Terrence 'T.C.' Carson, Greg Eagles, Yuri Lowenthal, Phil LaMarr, Samuel L. Jackson
Fuminori Kizaki
Eric Garcia, Leo Chu, Eric S. Calderon, Tommy Blacha
Studio Gonzo
2 hours 55 minutes
15/10/2007
Thank you for supporting DVD365.net when you order using the link(s) below. As an Amazon Associate we earn from qualifying purchases
Buy DVD
Information

Samuel L. Jackson has a penchant for an Afro (think Pulp Fiction) and for Sci-Fi (Star Wars) so what could be better than mixing the two? Jackson lends his voice to two of the lead characters in the beautifully animated Afro Samurai, out on DVD on 15th October 2007 from Studio Gonzo.

Afro Samurai is the story of a black samurai in a futuristic yet feudal Japan who is on a mission to avenge the wrongful death of his father. As a young boy, Afro sees his father killed in front of his eyes in a ritualistic fight to the death. The boy grows into a badass young man who, despite the advice from his friends and teacher, can not rest until he rights the wrong done to him. Afro's fighting skills are honed as he secretly searches for the legendary Number 2 headband - the holder of this headband is the only worldly being able to hurt the Number 1, who just so happens to be his father's killer.

After he takes on the mantle of Number 2, he travels a warrior's solitary path in his search for revenge, fighting off a myriad of enemies all intent owning the legendary Number 2 headband for their own chance to challenge to be Number 1. As well as enemies, occasionally allies also come along the way including Ninja Ninja (also voice by Jackson), and the stoic warrior strives to keep his focus (and his dignity) while Ninja Ninja jabbers away.

With an original score by Wu-Tang Clan member RZA and supporting voices coming from such stars as Ron Perlman (Hellboy, Blade II) as Afro's nemesis, Justice and Kelly Hu (X-Men II, The Scorpion King) as Okiko, Afro Samurai is the smash hit action series of the year. The exciting, action packed and engrossing mash up of ancient Japan and present day, and beautiful artistic animation combined with decapitations, and impalements, mean that Afro Samurai is up there with Kill Bill and The Matrix as well as anime classics such as Akira and Ninja Scroll. This high octane entertainment will really reach out there to all action fans.

Afro Samurai started life as a five episode series (co-produced by Jackson), broadcast to 1.2m viewers in the USA on Spike TV and in Japan on Fuji Television. It has already premiered in the UK on Bravo in April 07 (as well as being featured by Jonathan Ross on Japanorama) and NAMCO will be releasing a high budget PS3 video game in 2008.

Afro Samurai is now available as a (2-Disc DVD) Director's Cut containing extensive extras including commentary on the voice recordings, the characters and the creation of the original sound track, the original pitch bible the producer used to sell the show and lots of production art. 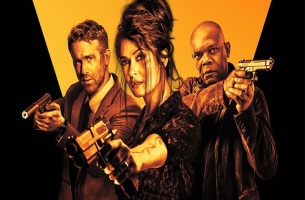