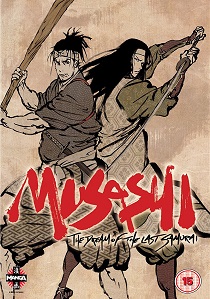 NewsHistory
News Article Go back to homepage
Bringing to life the extraordinary story of the legendary Japanese warrior Miyamoto Musashi, written by world-renowned anime writer-director Mamoru Oshii and directed by Mizuho Nishikubo, Musashi: The Dream Of The Last Samurai is released on DVD and Blu-ray by Manga Entertainment on 4th July 2011.
Mizuho Nishikubo
Mamoru Oshii, Mitsuhisa Ishikawa
Manga Entertainment
1 hour 12 minutes
04/07/2011
Thank you for supporting DVD365.net when you order using the link(s) below. As an Amazon Associate we earn from qualifying purchases
Buy DVD
Buy BD
Information

Bringing to life the extraordinary story of the legendary Japanese warrior Miyamoto Musashi, written by world-renowned anime writer-director Mamoru Oshii (Ghost In The Shell; The Sky Crawlers) and directed by Mizuho Nishikubo (Otogi Zoshi), Musashi: The Dream Of The Last Samurai is released on DVD and Blu-ray by Manga Entertainment on 4th July 2011.

Nominated in the Best Film category at the Catalonian International Film Festival in 2009, the film inventively utilizes a wide variety of animation styles - at times combined with live-action backgrounds and landscapes - to depict the exploits of one of the most famous figures in Japanese history.

A name instantly familiar to any Japanese citizen or those familiar with Japanese culture, Miyamoto Musashi was a highly skilled swordsman who has over the years become regarded as part historical figure and part romanticized mythical hero. In addition to writing one of the key texts on Japanese samurai tactics and philosophy, "The Book of Five Rings", he is also famous for inventing the Ni-Ten Ichi Ryu style of fighting with two swords, perhaps the most obvious and internationally recognized visual trademark of the samurai.

But even with so much academic study dedicated to Musashi's life, so many books written on him and countless movies, anime and manga stories inspired by his heroic escapades and sage teachings, questions about the man still remain unanswered. In an amusing, entertaining and informative manner, Musashi: The Dream of the Last Samurai attempts to answer one in particular: What motivated the great warrior to adopt and perfect his trademark dual bladed style?

Through striking visuals, intense battle scenes, and rich history, Oshii and Nishikubo take the viewer on a voyage through time itself, in an anime feature full of glory, turmoil, and accomplishment mixed with the kind of kick-ass samurai attitude that every anime and martial arts fan could wish for.

HotDVDBD
From the producers of Nobody and John Wick comes a bare-knuckle, coal-dark holiday action-comedy that says you should always bet on red as Violent Night sledges in on DVD and Blu-ray 6th March 2023 from Warner Home Video. END_OF_DOCUMENT_TOKEN_TO_BE_REPLACED
Top PicksView