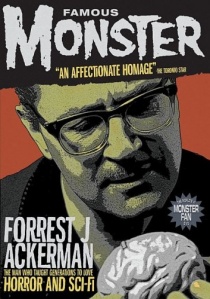 Ackerman, the writer, editor and literary agent who has been credited with coining the term "Sci-Fi" in the 1950s, has inspired generations of young horror movie fans and some of Hollywood's most successful film-makers with what will always be known as 'the first movie monster magazine', Famous Monsters of Filmland.

Through the use of archival footage, film clips and interviews with Ackerman and some of the biggest names in fantasy films he inspired, (Roger Corman, Ray Harryhausen, Ray Bradbury, John Landis, Joe Dante, and George Clayton Johnson, among others) Famous Monster shows the journey Ackerman took as he grew up from being a kid reading Amazing Stories magazine and watching movies like Metropolis and Phantom of The Opera, to a literary agent to the biggest names in fantasy writing, to the editor of Famous Monsters of Filmland.

This fast-paced, affectionate profile of Ackerman is packed full of all of extras including, deleted interviews, and a tour of the infamous 'Ackermansion', which houses Forry's 300,000 piece collection of horror memorabilia, regarded as one of the world's largest personal collection of science fiction and fantasy memorabilia

Famous Monster is a true collectable and a wonderful tribute to the man who created the world of science fiction.