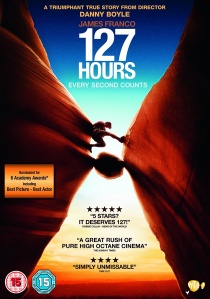 Directed by Academy Award® winner Danny Boyle (Slumdog Millionaire, Trainspotting), and adapted from the true story Between a Rock and a Hard Place, the critically acclaimed masterpiece 127 Hours finds its way onto Blu-ray and DVD on 6th June 2011 from Pathé Productions Ltd.

Golden Globe® winning actor James Franco (Milk, Spiderman) plays Aron Ralston, an extreme sports enthusiast who enjoys nothing more than exploring his natural surroundings and pushing is body to the limit. One weekend he goes canyoneering in the breath taking and remote Blue John Canyon in Utah to do what he loves most, but without telling anyone where he is going, and leaving his mobile phone behind...

Aron is in the middle of a routine climb when a boulder suddenly becomes dislodged just above him crashing onto his arm and leaving him trapped in solitude inside a dark, isolated canyon. Over the next five days Ralston does everything he can to prolong his life while wrestling with hunger, thirst, flashbacks and hallucinations.

This breathtaking film takes you on a journey through the mind of a man forced to come to terms with himself in the most extreme of circumstances. 127 Hours is a visceral, thrilling ride that demonstrates what the human mind can achieve when it chooses to fight for life.

The Blu-ray disc comes filled with a host of extras and special features including: Academy Award® winning short film God of Love, Search & Rescue which retraces the actual events that aided in the search and rescue of Ralston, and 127 Hours: An Extraordinary View which details the collaboration between Danny Boyle and James Franco.

UHD
Mega-action hero Liam Neeson stars as a father in search of answers after his son is mysteriously murdered in Cold Pursuit, arriving on 4K UHD, Blu-ray and DVD 24th June 2019 from StudioCanal. END_OF_DOCUMENT_TOKEN_TO_BE_REPLACED
Hot PicksView