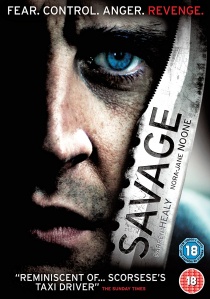 Savage, released by High Fliers on 14th March 2011, is the debut feature from writer-director Brian Muldowney and starring Darren Healy (Disco Pigs; Layer Cake) and Nora-Jane Noone (The Day Of The Triffids; The Descent; The Magdalene Sisters) in a gritty and brutal "Straw Dogs"-meets -"Taxi Driver" exploration of violence, obsession and revenge that has been described as "uncompromising... utterly compelling... [and] not for the faint-hearted" (Spotlight).

Dubliner Paul Graynor (Healy) works as a freelance press photographer, visually documenting the day-to-day events of a vibrant city that, like many others, is becoming increasingly hostile and threatening. What Paul doesn't realise is he is about to become front-page tabloid news himself.

Walking home alone at night after a date with Michelle (Noone), the care worker who is responsible for looking after his ailing father, Paul is accosted and violently assaulted by two youths. Left unconscious by his attackers, he awakes several days later in hospital where he learns the shocking truth about his injuries.

Recovering at home, Paul struggles to come to terms with both the physical and psychological scars the attack has left on him. But his fear and insecurity slowly but surely turn to anger, a process that will ultimately transform him from cowering victim into ruthless avenger.

A powerful and unflinching study of the perceptions of masculinity, the effects of random violence on an individual and the moral ambiguities of what can be judged to be an acceptable response to such acts, Savage "confronts the ugliness of the rage within us" (The Sunday Times) and, in director Brian Muldowney, "reveals a distinctive directorial voice" (The Irish Times).

HotDVDBDUHD
An action thriller unlike any other, a young getaway driver relies on the beat of his personal soundtrack to be the best in the game in Baby Driver, the newest explosion of genre-crossing excitement from writer-director Edgar Wright, released on 4K Ultra HD, Blu-ray and DVD ... END_OF_DOCUMENT_TOKEN_TO_BE_REPLACED
Top PicksView