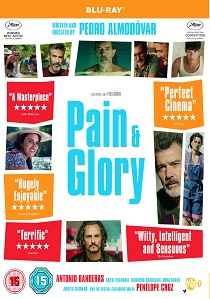 Salvador Mallo is a veteran film director, afflicted by multiple ailments, the worst of which is his inability to continue filming. His physical condition doesn't allow it and, if he can't film again, his life has no meaning.

The mixture of medications, along with an occasional flirtation with heroin, means that Salvador spends most of his day prostrate. This drowsy state transports him back to reflect on his childhood in the 60s, when he emigrated with his parents to Paterna, a village in Valencia, in search of prosperity, and the struggles and improvising his Mother made so that the family could survive.

In recovering his past, Salvador finds the urgent need to recount it, and in that need he also finds his salvation.

Related Articles
Machete Kills, Black Butterfly, Acts Of Vengeance, Unchained, Security, Knight of Cups, The 33, The Spongebob Movie: Sponge Out Of Water, Justin and the Knights of Valour, I'm So Excited, Ruby Sparks, Haywire, Puss In Boots, The Big Bang, The Skin I Live In, My Spy, The Mask of Zorro, Spy Kids, The Music of Silence, Life Itself, Dolittle
Comments
Hot Pick

HotUHD
Now more stunning than ever before, return to the stunning locations and epic adventures in Peter Jackson's Middle-earth in The Lord of the Rings Trilogy, arriving on stunning 4K UHD 30th November 2020 from Warner Home Video. END_OF_DOCUMENT_TOKEN_TO_BE_REPLACED
Hot PicksView