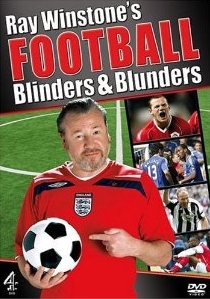 NewsSpecial Interest
News Article Go back to homepage
Hotter than a lorry-load of stolen vindaloo, Ray Winstone takes you on a journey of the funniest gaffes, craziest cock-ups and the most brilliant bits of the beautiful game in Ray Winstone's Football Blinders And Blunders, released on DVD from 4DVD on 24th November 2008.
Ray Winstone
4DVD
1 hour 0 minutes
24/11/2008
Thank you for supporting DVD365.net when you order using the link(s) below. As an Amazon Associate we earn from qualifying purchases
Buy DVD
Information

Hotter than a lorry-load of stolen vindaloo, and twice as tasty, Ray Winstone; actor, geezer and football nut, takes you on a journey of the funniest gaffes, craziest cock-ups and the most brilliant bits of the beautiful - and occasionally ridiculous - game in Ray Winstone's Football Blinders And Blunders, released from 4DVD on 24th November 2008.

The title also features an exclusive and insightful interview with Ray talking about all aspects of the game, including why he loves it so much, his favourite football heroes and villains. From cack-handed keepers to self-destructive defending, the DVD features over 90-minutes of the best footage football has to offer... Defences that are leakier than a worn-out sieve on the Titanic, penalty takers who have lost that battle, and their bottle - plus a bunch of dozy keepers! Ray Winstone's Football Blinders and Blunders also offers a little reminder of the sheer magic from the players that produce the goods on the pitch. From the legends of yesteryear -- such as the ultimate goal machine, Alan Shearer -- to the latest crop of football geniuses, like the boy wonder himself... the one and only, Cristiano Ronaldo... the DVD features some of the most spectacular bits of skill in the game.

If it's embarrassing own-goals, almighty balls-ups or just downright classic gaffes you're after, look no further than this bright and brilliantly entertaining collection that will delight and tickle football fans everywhere. Ray Winstone says: 'I did box for England as an amateur, and I was a bit tasty with my fists until going into the acting game. But football has always been my first love, and I'm pleased to share some of my favourite moments with you in this DVD.'

Ray Winstone is one of the UK's best-loved actors. An Emmy-award-winning film and television star, he is mostly known for his 'tough guy' roles, beginning with that of Carlin in the 1979 film Scum. He is also a massive West Ham FC fan and passionate follower of the Beautiful Game. In 2006 he was the FA's Fans' Ambassador for the World Cup. Recent acting credits include playing Indiana Jones' sidekick in Indiana Jones and the Kingdom of the Crystal Skull (2008), Beowulf (2007) and The Departed (2006). He is currently shooting a remake of classic 80s cop show The Sweeney.