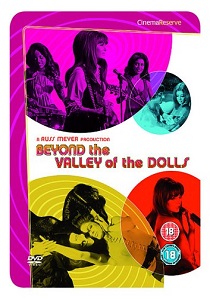 Inspired by the book from Jacqueline Susann and the film Valley of the Dolls, Twentieth Century Fox Home Entertainment takes its Cinema Reserve Collection back in time to the era where sexual revolution gripped the world with Beyond the Valley of the Dolls. This glorious cult classic is released to buy on DVD from 12th February 2007.

From renowned and outrageous director Russ Meyer, this riotously funny satire of the 1960s controversial Valley of the Dolls boasts a host of psychedelic special features. This special edition DVD includes an introduction by Z-Man, John Lazar, plus a fascinating 30-minute featurette 'Above, Beneath and Beyond the Valley' about the making of the hit musical-horror-sex-comedy!

Beyond the Valley of the Dolls tells the story of a small town all-female rock band as they head for the bright lights of Hollywood with their manager, Harris (David Gurian), to find fame and fortune.

'The Carrie Nations' fronted by lead singer Kelly (Dolly Read) with drummer Pet (Marcia McBroome) and guitarist Casey (Cynthia Meyers) explode onto the music scene, but soon they fall for the darker side of Hollywood and the evils of drugs, booze and sex!

As the girls hit the big time, their personal lives start to fall apart. Indulging in copious amounts of drink, drugs and experimental sex, things quickly start to unravel with tragic consequences. A hedonistic night of drugs and debauchery leads the girls' to discover a sinister truth about their fast-talking promoter, Z-Man that puts all their lives in danger!

HotUHD
Now more stunning than ever before, return to the stunning locations and epic adventures in Peter Jackson's Middle-earth in The Lord of the Rings Trilogy, arriving on stunning 4K UHD 30th November 2020 from Warner Home Video. END_OF_DOCUMENT_TOKEN_TO_BE_REPLACED
Top PicksView