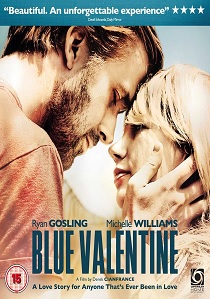 FeatureRyan Gosling
Feature Article Go back to features
Blue Valentine is the story of love found and love lost told in past and present moments in time. Flooded with romantic memories of their courtship, Dean and Cindy use one night to try and save their failing marriage. Ryan Gosling and Michelle Williams star in this honest portrait of a relationship on the rocks.
Ryan Gosling, Michelle Williams, Faith Wladyka, John Doman, Mike Vogel, Marshall Johnson, Jen Jones, Maryann Plunkett, James Benatti, Barbara Troy, Carey Westbrook, Ben Shenkman
Derek Cianfrance
Doug Dey, Cassian Elwes, Carrie Fix, Ryan Gosling, Lynette Howell
Unknown
1 hour 52 minutes
2010
Thank you for supporting DVD365.net when you order using the link(s) below. As an Amazon Associate we earn from qualifying purchases
Buy DVD
Buy BD
Information
What was your inspiration for the film?

When I was a child I had two nightmares-nuclear war and my parent's divorce. This film confronts the second fear.

How did the film get off the ground? What was the process of getting the film made?

11 years of starts and stops. I distinctly remember printing out the first draft of the script in the summer of 1998, and believing we would be shooting by the fall of that year.

I met Michelle Williams in the spring of 2003, and I tried, in vain, to get the film off the ground with her. Then I met Ryan in 2005, and we tried to get the film going in a couple of different scenarios and we just kept running into red lights. Bankruptcy, firings, death, etc., kept the film in a constant state of limbo. For a long time, the film felt cursed.

I met my producers Jamie Patricof and Alex Orlovsky (Hunting Lane Films) and Lynette Howell (Silverwood Films) during this time, and I felt very lucky to have them show such commitment to the film. They tried as hard as I tried; they got heartbroken as much as I did. We suffered together.

We just kept believing in it. Kept focusing on it. I kept watching the movie in my head over and over and over again. Kept preparing. Kept planning. Stayed inspired. Practiced. Kept working with the actors to make it better.

Once the opportunity came, when the light turned green, we just went straight into it and somehow we managed to turn our curse into a blessing.

I implemented a rigorous process which I had been preparing for those 11 years. And I was thankful for the time that I was forced to wait. The film is better for it.

We made the film we wanted to make.

How long was the shoot? Where did you shoot?

30 days, give or take. We shot in Pennsylvania-Scranton and King of Prussia-and in Brooklyn.

What is your favorite scene in the film?

However, I will talk about how my favorite moments in the film are illuminated by the invisible, yet tangible connection between Ryan and Michelle.

I distinctly remember the first scene we shot with them together on camera-when Dean comes over with flowers to dinner at Cindy's parent's house. I was super nervous, because in making a portrait of an intimate relationship, everything depends on chemistry. If it is not there, then you have to resort to gimmicks and tricks to create a screen bond. Needless to say, I exhaled deeply when I saw them together for the first time. There was a magic spell between them. I embraced it, and we all were witnesses.

What was the most difficult scene to shoot?

Shooting the movie was like a vacation. All the hard work went into prepping the film and then the marathon edit. Shooting the film was the best time of my life. If I had to choose one, I'd say all the scenes in the future room because the scenes were relentlessly intimate and the space was cramped and claustrophobic. The shower scene, which we shot over two days, was particularly challenging. First off, we had two naked actors completely exposed in a slippery shower and two cameras, two operators, a boom operator, an A.D., and myself, all in a little bathroom. We were shooting long takes and the cameras kept steaming up and after 20 minutes they would shut down because of the heat. Ryan and never complained though and were champs the whole way through. However, by the 8th hour of shooting, on the second day, they were definitely ready to get the hell out of the bathroom. These, as planned, were the takes we used in the film.

The film is told in past and present moments with the past moments chronicled over a number of months and the present over just 24 hours. Why did you decide to tell the story this way?

This same duality lives in the film's temporal structure. I wanted the film to play like a memory, with the past being long-term memory and the present being short-term memory. I've always been fascinated by what time does to experience. It seems to amplify it and embellish it. A simple moment can be remembered as something momentous. At the same time, I am amazed when time and moments fall through my grasp in my present existence. For instance, when I'm driving, 20 minutes feel like 20 seconds. Where does the time go?

I wanted to deal with these amplifications of time, and ellipses of time, in a cinematic way.

Describe the casting process and why location played such an important role in the film?

From the beginning I had always said that I wanted this film to be honest and to feature real people and real situations, rather than actors, whenever possible.

Location scouting and casting became part of the same process.

To cast the movers, we visited a number of moving companies in the New York area, not only looking for the ideal location, but also for the ideal movers. We auditioned the folks who worked at each of them. Jamie Benatti, whose family has owned Steinway movers for over 50 years, turned out to be the perfect boss, and one of his employees, Marshall Johnson, fit the role of Charlie (now Marshall).

We scheduled the moving scenes on May 1st, when our cinematographer Andrij Parekh was moving from his one-bedroom apt. in the East Village to Park Slope. We hired Steinway to do the move. Ryan reported to Steinway that morning, and worked with Jamie and Marshall all day moving Andrij's possessions into his new home.

Similarly, we filmed all of the retirement home scenes at Wayne Delaware Manor, an assisted-living facility in Pennsylvania. All of the background lived there, and we kept a low profile, taking over an empty room to film our scenes.

In the same way, we filmed the abortion scenes in a real Planned Parenthood clinic, using real personnel. Michelle went through the entire process in character, as though she was a regular person undergoing the procedure. In order to heighten the sense of intimacy, the crew was limited to me, as camera operator, and Mariela Comitini, our 1st A.D. as boom operator.

What format did you shoot the film on?

Back in 2002, I wrote a manifesto, outlining the "rules of engagement" for making the film. In production, I adhered to those rules.

We shot the past on super 16mm film. 100% handheld. Using one 25mm lens. The idea was to create a visceral film that mirrored the physicality and youthfulness of our characters. Freedom. Opportunity.

We shot the present on two red cameras. The cameras were always affixed to tripods and placed as far away from the actors at all times. We affixed long lenses to achieve the suffocating close-ups. The idea was to create a claustrophobic world of close-ups and gestures, faces and feelings, which would mirror the entrapment our characters faced in their own lives. Consequence. Desperation.

As one of the film's screenwriters, what do you think the essence of the film and its characters are about?

Related Articles
I Feel Pretty, All The Money In The World, The Greatest Showman, Certain Women, Manchester by the Sea, Suite Francaise, Oz, The Great and Powerful, Take This Waltz, My Week with Marilyn, Blue Valentine, Shutter Island, Incendiary, The Baxter, Deception, Venom, Venom: Let There Be Carnage, Venom: Let There Be Carnage
Blade Runner 2049, La La Land, The Nice Guys, The Big Short, Only God Forgives, The Place Beyond The Pines, All Good Things, The Ides Of March, Crazy, Stupid, Love, Drive, Blue Valentine, Lars And The Real Girl, Fracture, First Man, Drive: Special Edition, Us, Drive
The Case For Christ, Under the Dome, Pan Am: The Complete Series, Blue Valentine, She's Out Of My League, Open Graves, The Deaths of Ian Stone, Cloverfield
Blue Valentine
Borgia: Series 1, Blue Valentine, You Were Never Really Here, Cold Pursuit
Blue Valentine
Breathe In, Pi: 15th Anniversary Edition, Royal Pains: Season 1, Just Like Heaven
The Light Between Oceans, The Place Beyond The Pines, Blue Valentine
Comments
Hot Pick

HotUHD
After moving to a new town, two brothers discover that the area is a haven for vampires as the classic The Lost Boys is released on 4K UHD 20th September 2022 from Warner Home Video. END_OF_DOCUMENT_TOKEN_TO_BE_REPLACED
FeaturesView 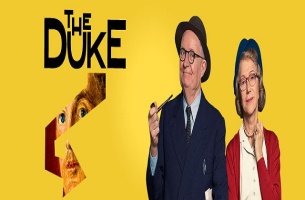 DVDBDNOTES
30/06/2022
In 1961, Kempton Bunton, a 60-year old taxi driver, stole Goya's portrait of the Duke of Wellington from the National Gallery in London. It was the first (and remains the only) theft in the ...