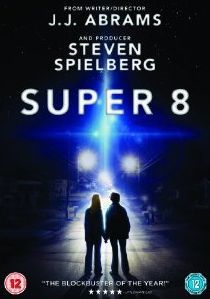 During the school holidays of summer of 1979, and at the height of the Cold War, film fanatic Charles Kaznyk and five of his friends - Joe, Alice, Cary, Preston and Martin - are spending the majority of their time making a zombie movie with an 8mm camera for the upcoming Cleveland film festival. The film is also the perfect distraction for Joe Lamb (who does the make-up, sound and special effects) whose mother Elizabeth had been recently killed in a tragic accident at a local steel plant.

With the filming going well, the group sneak out late at night and arrive at the local train station for an important scene where Charles intends to shoot a scene with Martin trying to get his wife to leave because of a zombie infection. Joe is completely smitten with Alice so he's more than happy to be around her, and when she delivers an amazing performance during the rehearals, the group are left gobsmacked - and close to tears. However, the boys are soon snapped out their daze by the distant sound of an approaching freight train. Charles quickly demands that they start filming so they can include the train passing through the station in their film.

With the camera now rolling, Joe suddenly notices a pickup truck driving onto the track and playing "chicken" with the train. Watching in horror, the inevitable happens, and the train smashes into the car, causing a massive derailment. With carriages being flung left, right and centre, explosions galore and debris falling around them, the children literally have to run for their lives - and all this time their camera is left filming the unfolding disaster around them.

Once the dust has settled the children, like children do, investigate the crash site and discover the, as yet not dead, body of the truck's driver. If this is not startling enough, the driver turns out to be their biology teacher, Dr. Woodward. Woodward pulls out a gun and instructs them to never talk about what they've seen - otherwise they, and their families, would be killed. As the Air Force arrives the children flee, but not before Joe notices one of the carriages shaking violently - before a steel door is yanked violently open by something which disappears into the night. Over the next couple of days weird things start happening in the sleepy town and it becomes clear that something escaped from the wreck - if only they had some evidence on film...

The film is presented in its original 2.40:1 aspect ratio with an average bitrate of 6.35Mbp. The transfer is near pixel perfect with superb textures, a high level of detail throughout and some impressively solid black levels - especially during the dramatic night time scenes. The film also contains a limited amount of grain, but the clarity remains impressively strong throughout with a carefully crafted palette of blues and greens. The various colours of the clothing and vehicles of 1979 are also reproduced perfectly without being too overboard - and as a child growing up in the late 1970's I can assure you that the clothing is hideously accurate.

With the film originating from the stable of Steven Spielberg and J.J. Abrams you'd be expecting something rather special in the sound department. I believe the Blu-Ray version is pretty impressive, but the Dolby Digital 5.1 448Kbps on this DVD is no slacker. The dialogue is clear and precise in the centre and front channels with some good stereo separation and directional effects whilst the action scenes give the surround and LFE channels a serious workout. And with one of the best train crashes you're ever likely to see in a film, the accompanying soundtrack can be summed up in one word - outstanding! Even the musical score is perfectly blended with the on screen action and it's never obtrusive.

With such an outstanding transfer and wonderfully dynamic soundtrack (and if it's not loud enough for you, there's even a D-BOX motion control option available too), Super 8 is film which home cinema was invented for. It's an old cliche, but it's demonstration material for sure - even if you've still not embraced high-definition Blu-Ray. Releases such as this are what DVD and Blu-ray were invented for.

The menu system is nicely animated with clips from the film and dramatically scored - although the sub-menus are static and silent affairs. Extras wise, the DVD is never going to beat what the Blu-Ray has to offer, but at least Paramount have decided not to completely abandon DVD fans and release vanilla titles as there's a good selection on offer here - and with subtitles available too.

The main extra can be classed as Audio Commentary by J.J. Abrams, Bryan Burk and Larry Fong. Unfortunately, there is very little input from the commentary shy Steven Spielberg - he doesn't even respond to an impromptu question via a text message to his phone. The yack track gets off to a slow and shaky start, but it does pick up (probably aided by a few beers to loosen the tongues) when they start to talk about the on-screen action and, although there's the inevitable overlap between the various featurettes, it still worthy of a listen.

The 16 minute The Dream Behind Super 8 featurette looks at the background to the film - with quite a few clips from J.J. Abrams own Super 8mm movies thrown in for good measure too. There's plenty of carefully crafted behind the scenes clips (which leave you thinking that they were deliberately filmed for the DVD extras) plus various interviews with cinematographer Larry Fong, producer Bryan Burk plus Steven Spielberg and J.J. Abrams who all discuss their childhood love for all things film. Steven Spielberg and J.J. Abrams also discuss their meeting of minds and ideas which eventually came up with the idea for the film. There's also a small clip of the train crash scene and it's possible to make out just how much CGI was needed to make it so realistic. It's a good featurette and worthy of a view - if only to hear about Steven Spielberg and J.J. Abrams early efforts into film making.

The 12 minute The Visitor Lives featurette looks at, or rather tries to look at, the star of the film - the elusive alien creature which has the handy knack of being hidden behind an advertising hoarding or out of camera shot. Creature designer Neville Page talks about the evolution of the development and design of the creature - and reveals that both Steven Spielberg and J.J. Abrams had different ideas for the design of the alien. With big personalities on show, it's hardly surprising to learn that it took nearly 12 months to come up with the final design. Needless to say, the "less is more" approach works well, with keeping the creature hidden until the end of working well. Again, it's another interesting extra which fans of extras are sure to enjoy.

Super 8 is a bit of a strange one. The influences of the mighty Steven Spielberg are there for all to see, but what we've ended up with is a film which is a cross between Stand By Me, The Goonies, Jurassic Park and E.T. : The Extra-Terrestrial. Trouble is, after it's all been blended and bashed together, I'm not really sure whether it all works.

The backdrop to the story, with the children filming a Zombie movie, is great (in fact, if you hang on long enough into the end credits you'll get to see it) and it's potentially better than the main film (well, it's certainly more entertaining!). And just like the young actors in The Goonies, the young actors in Super 8 are wonderful – with Fanning and Courtney particularly excellent. Surely a long and graceful career awaits this duo.

But, acting aside, I have to say that I was rather disappointed with Super 8. It had so much potential. The premise was a good one, plus it came from the mind of J.J. Abrams who drew on movie ideas from his childhood, but upon the closing credits I was simply left to contemplate what I'd just seen – which is not good – and it ended up with me coming to the conclusion that it was simply all a bit of a mess. It's no wonder Steven Spielberg and J.J. Abrams took so long to formulate some sort of story.

It's a shame really as I really wanted to enjoy this film and, other than the highly entertaining (and extremely noisy!) train crash, Super 8 is left to be one of those "nearly" films which results in Marmite styled arguments between those people who either love or hate it. Unfortunately, I'm in the hate camp (and that goes for Marmite too).

DVD
You ever hear the one about the cop, the blonde, the psycho and the mafia princess? Birds Of Prey And the Fantabulous Emancipation of One Harley Quinn, coming to DVD, Blu-ray and 4K UHD 20th June 2020 ... END_OF_DOCUMENT_TOKEN_TO_BE_REPLACED
Latest ReviewsView