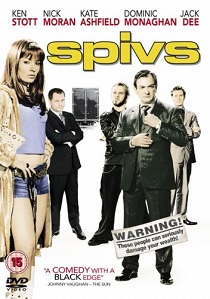 Fed up with small time scams, Jack gets his London based crew involved with big timer Villa on a get-rich-quick scheme. But things soon go drastically wrong when the group discover that the haulage lorry they've just stolen from smugglers is not full of illegal cigarettes or alcohol but illegal immigrants instead. With everyone taken by surprise, most of the occupants make a run for it, but Jack gets lumbered with a scruffy eleven year old girl called Nadia and her frightened younger brother Christos.

Jack has to decide what to do with them, and he's in two minds as to whether to simply dump them at the side of the road. But he's a spiv, not a heartless soul, and it's not long before Nadia and Cristos are taken in and are fed and found a bed for the night with Jack's cousin Vee. With trust eventually growing between them, Nadia shows Jack a picture of where they are to meet their sister Sonia and, recognising the location as Victoria Park, Jack decides to take the two to the meeting point. But when Sonia fails to show Jack consults Omar, a man with his eyes and ears to the ground, who finally discovers an address where she can be found.

Finally happy that he's managed to track down Sonia, Jack duly takes them to the address supplied by Omar. However, upon their arrival it quickly becomes obvious that Sonia is not there and that they were simply destined for a miserable life in the sex trade. And if things couldn't get any worst, Jack has only gone and upset the Russian Mafia and it's not long before the furious chief smuggler goes on a bloody vendetta, determined to wreak revenge for the loss of his precious cargo.

The picture is bright and colourful whilst images are sharp with a high level of detail throughout. Given that the main focal point of the film takes place at night, and in the pouring rain too, the picture holds us remarkably well with solid blacks levels and little or no sign of artifacting or outlining. The transfer also shows no signs of problems with dust specks or other imperfections. But, even on a low budget, with such a recent theatrical release such as this the image shouldn't have been anything but perfect.

Whilst the audio is provided by a 448 Kbps Dolby Digital 5.1 soundtrack it is rather flat and uninspiring. Still, with no earth shaking special effects or lengthy high speed car chases through the streets of London, the film hardly calls for anything spectacular and what is presented here more than does it job. The dialogue is crisp, clear and well presented in the front channels, whilst the musical score and the occasional ambient effect finds its way to the rear channels. Also, with the lack of a challenging soundtrack, there are no LFE effects of note. In fact, I'm not even sure whether I heard any.

The menu system is nicely animated and scored with a number of cut scenes from the film introducing the major characters of the film. However, one minor complaint I have is that the designers have tended to opt for cut scenes where the characters are talking. As a result it all end ups looking rather hurried and not as effective as it could have been. Still, the transition effect from actors face to a playing card is quite impressive.

As for extras, they're a bit on the short side with only a featurette and commentary track worthy of note. Still, it's better than nothing, and given the low budget and rather low key nature of the film, it's nice to find more than just the theatrical trailer or production notes. However, another minor complaint are the lack of subtitles. Whilst they are obviously an advantage for people who are hard of hearing, they also come in handy for when you want to watch the film with the audio commentary enabled.

The main extra is the Commentary with director Colin Teague and writer Gary Young. The pair are obviously proud of their production and they chatter away quite happily about pretty much everything and everyone involved in the film and its production, even managing to reveal that one of their three Mercedes cars used in the film was stolen. There's the usual back slapping moments, but the most interesting parts of the commentary are the details on the sets, locations and, thanks to the complicated research of simply reading a book, the numerous confidence tricks used in the film.

The sixteen minute Making of Featurette is worthy of a look in, although make sure you've selected the first audio track as, for some odd reason, the second Pro-logic track is out of sync by a number of seconds. There's the usual collection of interviews with the majority of the cast members who discuss their characters, and the origins of a "spiv", whilst most of the technical information is obtained from the writers and producers. Things are rounded off with the ever present Theatrical Trailer.

Whilst Spivs is yet another British gangster style movie, this is by no means a Guy Richie movie. As a result, Spivs makes a refreshing change from the incessant stream of violent gangster films which the British film industry only seem to be capable of churning out these days. But saying that, fans of such films may also be a little disappointed as the art of the confidence trick is soon pushed to one side as it concentrates on an all too common theme these days - people smuggling and illegal immigration. Still, it's a good British comedy/drama which is at least worthy of a rental.

DVD
Based on the bestselling comic book, Vin Diesel stars as Ray Garrison, a soldier recently killed in action and brought back to life as the superhero Bloodshot, available 8th June 2020 from Sony ... END_OF_DOCUMENT_TOKEN_TO_BE_REPLACED
Latest ReviewsView