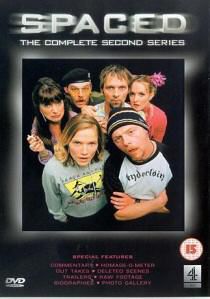 Tim's career is suffering a great deal. It's been eighteen months but he still hasn't got over the horror of the Phantom Menace and the terror that is Jar Jar Binks. Mind you, Daisy isn't doing much better with her small magazine articles only pulling in enough money to send her on a whirlwind tour of Asia.

Brain is going steady with Twist and he may just manage to get his art on display this year. However, he still has to deal with his mother who doesn't realise that he is an artist living in a squalor that is known as his flat. It is going to get even worse for Brain as his mother is planning on making a visit.

Mike is, well, still the same crazy Mike and he's managed the promotion to sergeant he so longed for. This year is going to be special for Tim and Mike as they are planning on entering their new robot killing machine, Sir Killalot, in the BBC's "Robot Wars". Mind you, they still need to get it through the mysterious Robot Club where the first rule of the club is no talking about the club and second is, er, no smoking.

And finally let's not forget Marsha. She's still having problem with her daughter but has acquired a new lodger who may become a little worried over her advances. She still does her weekly shop down at Threshers but she's in for a nasty surprise when she discovers a relationship is not quite all that it seems.

The producers obviously had a bit more money to play with on this series, and it is certainly reflected in the quality of the picture. It is vastly improved over the first with a bright and colourful picture throughout and without a hint of artifacting or outlining. For a television series it is most impressive and a credit to the people at Channel Four.

With it being a made for television sitcom the sound is not going to be giving your surround system a workout. And indeed, this is the case, although it is more than adequate with some clear and precise dialogue. It even has a reasonable soundtrack which wouldn't go amiss on an audio CD.

The menu is animated and scored with the occasional comment made from one of the cast members whenever a menu option is selected. The menu is not one of the most exciting in DVD land, with a distinct hint of amateurism to it, but it is this fact that makes it all that more appealing.

Fortunately, the cast and producers are fans of the DVD format and this is reflected in the extras. The disc includes deleted scenes, trailers, outtakes and an insightful and absolutely hilarious commentary on each episode.

However, the best feature is the Homage-O-Meter. This is a subtitle option that indicates the film or television references made in the programme. It is quite surprising just how many references there are in the programme and how many you missed on the first viewing. One of the best homage's must be to The Sixth Sense. The scene was carried out so well that it literally had me crying with laughter. The timing was just perfect.

Although it not as comical as the first series, with something I can't quite put my finger on missing, it still manages to be one of the funniest programmes to grace the airwaves of the United Kingdom. Not only have Channel Four introduced the British to some of the most popular programmes on the planet, such as Friends and Frasier but they can produce home grown greats too. Highly recommended.

BD
You ever hear the one about the cop, the blonde, the psycho and the mafia princess? Birds Of Prey And the Fantabulous Emancipation of One Harley Quinn, coming to DVD, Blu-ray and 4K UHD 20th June 2020 ... END_OF_DOCUMENT_TOKEN_TO_BE_REPLACED
Latest ReviewsView