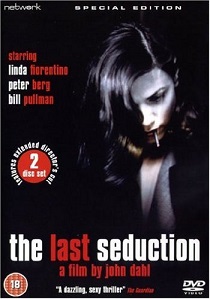 Review Article Go back to homepage
When Bridget Gregory runs off with nearly $1 million dollars of her husbands money she hides out in a small American town, meeting Mike Swale in process. But Mike has no idea about Bridget's past and her plans to use him to get rid of her husband.
Linda Fiorentino, Bill Pullman, Peter Berg, Brien Varady, Dean Norris, Donna Wilson, Mik Scriba, J.T. Walsh, Bill Nunn
Drama, Crime, Suspense/Thriller
2
1 Hour 45 Minutes
Buy DVD
Story

Bridget Gregory is a broad who wants it all, and she doesn't care who she tramples on to get it. When Bridget persuades her doctor husband Clay to sell medicinal cocaine to a drug dealer for a cool one million dollars, he needs to approach a lone shark in order to get some money to pay for the drugs. But once the deal has been done Bridget decides to run off with the proceeds, leaving the now penniless Clay to deal with his impatient loan shark. So with a broken finger, and only small amount of money coming in from writing scripts for the local junkies, he's forced to approach a private detective to track her down. But Bridget has fled to a small 'cow country' town and changed her name to Wendy Kroy to avoid her husband and his detective.

It's whilst she's sweating it out in the middle of no where that she meets Mike Swale, a local nice guy who is not use to seeing sexy, classy and beautiful outsiders staying in his no hope town, let alone expecting them to start a passionate and highly sexual affair with him. With Bridget advised by her attorney to stay low and out of harms way, she decides to take a short term job at insurance company. It is then that she starts to hatch an elaborate scheme that involves cheating husbands, angry wives, insurance policies and a tendency for murder. All she needs is a willing patsy. So enter the stage the one and only Mike Swale who, having fallen for her big time, is no longer thinking with his brain.

The picture is bright and colourful with a good level of detail throughout. The bright outdoor scenes are certainly impressive, with some nice colour and flesh tones even during the night time scenes, whilst the darker interior scenes do tend to suffer from problems with grain, excessive levels of contrast and low black levels. Although the picture doesn't suffer from too many problems with print damage, such as scratches, there are still a few noticeable glitches with dust specks. Still, given that this is a low budget production you can't really complain too much at the results.

The film has been remastered especially for this release with a brand new Dolby Digital 5.1 soundtrack. However, as good as it ultimately sounds, the jazz style soundtrack is extremely annoying and rather intrusive throughout. Although it is in keeping with the genre, it becomes so overpowering at times that you could almost be in a smoky jazz hall. Still, you can't really complain as where would a noir film be without a such soundtrack? Dialogue wise, things are much improved with a crisp and clear soundtrack in the centre channel, whilst a few of the ambient effects make their way to the rear channels. Never the less, I failed to detect any LFE effects, although did you really expect to get any?

The main and special features menus on both discs are simply animated and scored with the same annoying jazz music as featured in the film. Extras wise, they are spread across the two discs, with the Original Edition of the film on the first disc and the Director's Cut on the second. However, looking at the disc labelling you'd hardly be aware of this as they are indicated as The Film and Special Features - although I guess you could probably class the director's cut a special feature too. The disc set also includes a Collector's Booklet containing pictures and the Linda Ruth Williams article Linda Fiorentino as Screen Bitch.

The extras on the first disc start with the thirty minute featurette The Art of Seduction. Writer Steve Baranick and director John Dahl are both on hand to help explain all. Baranick is certainly the most interesting of the two, talking about the origins of the film and how he went about "trimming" his screenplay, whilst director Dahl concentrates on the characters. There's plenty of clips from the film whilst there's some rather old interview clips of Linda Fiorentino and Peter Berg whilst, rather oddly, there's newer Bill Pullman footage. All in all, it's a good featurette which is sure to inform the films legions of fans.

Next up is eight minutes worth of Behind The Scenes Footage. Now this is not your ordinary footage of the cast and crew messing about or full of pat on the back interviews, but proper B-roll footage of the cast and crew at work. The picture quality is not the best going, in fact it's pretty dire, but it's the actual filming process that appeals the most. Things are rounded off on disc one with the Original Theatrical Trailer.

The main extra on the second disc is the full length Audio Commentary from John Dahl for the extended version of the film. However, this extended edition is not what you'd class as being an outstanding one as both the picture and sound quality of the restored footage is pretty dire. Never the less, the commentary track is an interesting one that fans will find of interest with Dahl talking continuously about the original script, the meagre budget for the production, the characters and cast members Bill Pullman and Linda Fiorentino. If you'd rather not hack your way through the film in order to pick up the restored footage then it is also available in the Deleted Scenes section. However, you do end up having to watch half of the film because, for some rather odd reason, the restored scenes are shown along with some of the original scenes in the film.

Next up is an Alternate Ending with an optional commentary from John Dahl. The commentary track reveals the number of readings that they went through before deciding on not using attorney Frank Griffith in case it confused the viewers (surely that's half of the idea!). Still, this rather long ending doesn't actually differ too much from the original and, trying not to spoil things here, they should have used this far more satisfying ending than the version used in the film. Finally, and rather oddly, there's the twenty eight minute episode from the television series Fallen Angels titled Tomorrow I Die. It stars Kim Coates, Heather Graham and Bill Pullman and is a different take on those classic film noirs. All in all, a pretty healthy collection of extras that will keep the fans happy for quite a while.

The Last Seduction has often been classed as one of finest film noirs of late. But does it tick all those noir boxes? First off, the film noir genre tends to revolve around a number of flawed characters. Well we certainly have that in abundance. Then there's usually a crime which tends to be brought on from corruption or greed. So there's another box to tick. The film also needs to contain classic characters, such as a jealous husband, corrupt policeman, grizzled detective or a femmes fatale. There's a few more boxes to tick then. Well, you can be in no doubt that this a rather full on film noir. However, one of the biggest problems with being labelled as a film noir is that it becomes instantly predictable, and as such, it does take some of the shine off proceedings.

Never the less, Linda Fiorentino plays her part wonderfully, and although it's not as sexy or erotic as you might expect from all the PR fluff and film reputation (especially since Linda Fiorentino had a no-nudity clause), it still manages to keep you interested throughout and provides a satisfying, and as to be expected for the genre, clever ending. As a result, fans of the film and the genre in general are going to be rather thrilled with this two disc special edition. Not only do you have to choice of viewing the original theatrical edition along with the director's cut, the disc is positively bursting with extras - albeit with a rather strange Fallen Angels episode and there's that fairly rare instance of a collector's booklet too.

The Last Seduction won a number of awards for Fiorentino's powerful performance, including Best Actress at the Independent Spirit Awards, the London Critics Circle Film Awards and the New York Film Critics Circle Awards. Fiorentino was also nominated for a BAFTA, although she did miss out on the big one where her Oscar nomination was ineligible because the film was actually shown on network television before its theatrical launch. Still, The Last Seduction is no Basic Instinct, but as a cult classic it's the sort of package that DVD was invented for. 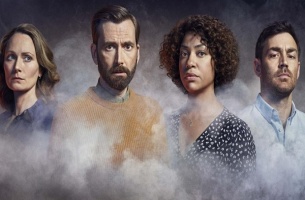