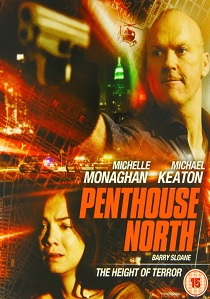 Sara lives with her boyfriend, Ryan, in Penthouse North - a plush apartment complex with stunning views of the New York skyline. Unfortunately, Sara can't appreciate the views as, as a former military photo-journalist, it's been three years since she lost her sight whilst on assignment in Afghanistan. Given her unfortunate predicament, and occasional flashbacks, her relationship with Ryan is still a good one and there's even talk of marriage. But all that she thinks she knows about her boyfriend is about to change as Ryan is revealed as not to be all that he seems.

It's New Year's Eve in New York City and the city is getting ready to join the party and wait for the ball to drop in Times square. But not everyone outside is in the mood for parting and, following a quick trip out to buy some champagne for the evening's celebrations, Sara returns home to discover a knife wielding murderer stalking her in her own home.

Managing to flee from her would be attacker, Sara runs onto the street and straight into the arms of someone offering to help. Unfortunately, that good Samaritan is not as he seems as the man in question is the murderous stalkers partner Hollander and the pair have come to recover something valuable which her boyfriend Ryan had taken from them.

Sara has no idea that her boyfriend Ryan was a thief, but she's about to discover that her life is in severe danger because of what he stole and from whom. Sara finds herself trapped in the penthouse with Hollander and his sadistic partner, and the vicious pair will do whatever it takes - torture, tearing the place apart and even killing, to find what they're looking for. While the party rages outside, inside Penthouse North Sara must fight for her life. It's kill or be killed.

Given that the majority of the film is set in a dark and dimly lit apartment the quality of the transfer was always going to be an important one. Fortunately, I was sent a Blu-ray edition of the film for review and, considering that DVD does tend to struggle with poorly lit scenes, I was relishing what the Blu-ray was going produce.

Fortunately, I wasn't disappointed. From the opening moments of the film, I was pleasantly surprised at just how sharp and detailed the images were. Whilst the colours were decidedly muted throughout, and possibly deliberately so, flesh tones were spot on and there was the occasional splash of colour to add some drama or direction to the scene. The picture is also free from signs of artifacting, dust scratches and any other forms of picture imperfections.

However, there were some image issues with a number of interior scenes where darker scenes became washed out and the usually rock solid black levels became a bit of a mess. Even presenting a pin-sharp image can cause issues as the apartment's New York skyline looked so obviously green screened it became a bit of a distraction. Still, I guess a limited budget and high-definition don't always go together well.

Sound wise, main the DTS-HD Master Audio 5.1 soundtrack is a reasonable one, although the dialogue could be a little too quiet at times and ending up drowned out by the ever present musical score. Fortunately, there was some good stereo steerage in the front channels whilst the ambient effects found their way around the entire sound stage. The disc is also equipped with a PCM Stereo soundtrack.

Scored with the film's moody soundtrack, and with cut scenes from the film showing in the background, other than scene selection, there's nothing else on offer as there's no extras whatsoever. Ok, it's a relatively low key film, with a tight production budget, but it's always interesting to find at least a Theatrical Trailer tucked away on a menu. It becomes even more disappointing when you discover that the American release comes with a Making Of featurette.

Unfortunately, things get worse as there's not even a set of subtitles for the hard of hearing. This is the second disc in recent days that I've reviewed which hasn't come equipped with subtitles. Whilst I don't need them myself, it's a little bit of a concerning trend which I hope I don't continue to see.

While not quite as creepy as he was in the fantastic Pacific Heights, Michael Keaton continues to prove that he's a fantastic actor - and he's much better in his "baddie" or "kooky" roles (as Beetlejuice - one of my all time favourites - goes to prove). Whilst the script doesn't let him "let rip" his bad guy persona, quite why he's not had more roles - with the last one of note being a small, but fun, role in Toy Story 3 - is a bit of a mystery. Perhaps he's was taking a holiday, or simply didn't fancy anything sent to him for considering. Surely, Hollywood script writers haven't simply forgotten him? Still, after handing in that black cape, let's hope the forthcoming Robocop is a hit and he ends up back in the "big time" soon.

I am in no doubt that the rather low budget, and low key, Penthouse North has been released to coincide with the release of RoboCop. Unfortunately, Penthouse North suffers from the usual movie clichés (although I guess they're pretty hard to avoid these days), some poor dialogue and a pretty predictable set-up that, after viewing the trailer, had me expecting far more of a Die-Hard style of film than it ultimately is.

I was also baffled that, given Sara had lost her sight in an explosion, her face and, particularly, her eyes, appeared to be unblemished by the incident. Still, although Michelle Monaghan is not going to win any awards for this outing in which she portrays your typical female victim who comes good, the film was always going to saved by Michael Keaton's sophisticated psycho Hollander.

Sure, it's a predictable thriller, with an interesting take on the "trusty" home invasion plot, but it still manages to be entertaining enough to warrant a viewing. Although you may not decide on a purchase, there's no reason why you shouldn't take a punt with a rental. After all, you'll get to see Michael Keaton at his bonkers best!