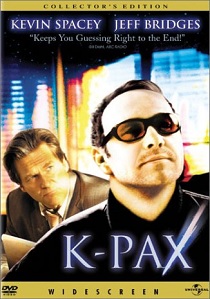 When a stranger intervenes in a scuffle at New York's Grand Central station witnesses claim he appeared from nowhere. When interviewed he has no identification and claims to be an visiting alien from the planet K-PAX in a solar system far from our galaxy. The police suspect he is high on drugs and have no alternative but to take him to the local psychiatric hospital for observation.

The stranger only identifies himself as Prot and after some time of refusing to talk to anyone he takes a liking to Dr. Powell and his bowl of fresh fruit. Dr. Powell is naturally unconvinced of his story and in order to try and get into Prot's mind he takes him to see a friend who is an astronomer. Prot is asked to show the location of his home planet and to the astronomers amazement knows more about his home galaxy than he should.

Together with some other amazing qualities, such as unexplained disappearances and the ability to see ultraviolet light, Dr. Powell starts to suspect the inexplicable and doubt his own prognosis. Is Prot really from outer space? Dr. Powell decides he nothing to loose by attempting some regressive hypnosis therapy on Prot. Surely that way he can discover just where he came from. But when Prot starts acting like a scared child Dr. Powell becomes convinced that there is far more to Prot that meets the eye.

The picture is bright and colourful with a massive amount of detail. As Prot doesn't like the bright sunlight this level of detail is certainly required throughout the films many dark and dimly lit indoor scenes. The bit-rate remains above average throughout and fortunately there's no signs of either artifacting or outlining. Overall it is a great result from the DVD technology for what could have been some poor picture reproduction.

Although the disc comes with both a Dolby Digital and DTS soundtrack there is little need for either. With this being a dialogue intensive film the only time the rear channels are called into action are for the the ambient sound effects and the haunting musical soundtrack. However, it is still a joy to listen to with the DTS soundtrack having the slight edge with its more spatial effects.

The menu is pleasantly animated and scored with the same haunting soundtrack to be heard in the film. The extras are reasonable enough with a fairly interesting Making of Featurette and Commentary by the director. It's just a shame that neither Kevin Spacey or Jeff Bridges is present as it would have been far more interesting to hear their opinions other than the short offerings given in the Making of Featurette. Also included are Deleted Scenes and an Alternate Ending that the director preferred. Jeff Bridges also shows his enthusiasm for the project by the presence of a photographic diary.

This is a very interesting film that has you wondering right up until the end. Even then it leaves a few doubts in the mind, and this is what makes this film interesting. However, I did feel that the writers gave a little too much information away and that eventually took the edge off what could have been a great film. Never the less, if you're into the X-files then you're sure to love this film.

UHD
Still reeling from the aftermath of Captain America: Civil War, Scott Lang is enlisted by Dr. Hank Pym for an urgent new mission in Ant-Man and the Wasp, released on DVD, Blu-ray, 3D Blu-ray and 4K ... END_OF_DOCUMENT_TOKEN_TO_BE_REPLACED
Latest ReviewsView 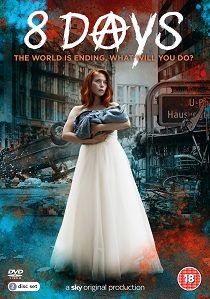