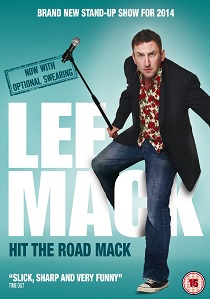 Review Article Go back to homepage
The multi-award winning star of Not Going Out and Would I Lie To You?, Lee Mack, is going back on the road with his first live tour in 4 years. Expect his trademark brand of high energy banter, well-crafted gags and sharp one-liners in one of the most hotly anticipated stand-up shows of the year.
Lee Mack, The Audience
Stand-up Comedy, Comedy
2
1 Hour 3 Minutes
24/11/2014
Buy DVD
Story

Lee Mack, one of the UK's most recognisable and celebrated comics, and the multi-award winning star of BBC One's Not Going Out and Would I Lie To You?, has released his first stand-up DVD in four years with Lee Mack - Hit the Road Mack.

Back on the road with his biggest show to date, and filmed across 7 nights at London's legendary Hammersmith Apollo, Hit The Road Mack showcases Lee Mack at the very top of his game, leaving the audience roaring with laughter with his trademark brand of high energy banter, well-crafted gags and sharp one-liners.

The Hit The Road Mack sell out tour started in September 2014 and has seen Lee play over 50 shows across 19 UK cities. In the DVD, we can expect to see plenty of Lee's trademark humour as he muses on the perils of everyday life while also sharing plenty of fun, quips and banter with the audience. But beware, this is no loony episode of Would I Lie To You? and the air soon turns rather blue with a full range of swear words...

Given that this is a stand up comedy gig recorded in a theatre you'd have to be a little bit on the weird side to expect some sort of Hollywood blockbuster with million pound CGI effects and swooshing surround effects. Nope, all we've got here is Lee Mack stood - well, I use that in the most loosely of phrases as he's constantly on the move - on a stage and telling jokes. There's a couple of different camera angles at the front of the stage, but the transfer is almost hardly worth talking about. Whilst it's never going to look like you're sat in audience with him, there's nothing wrong image quality and it's pretty much standard material for a comedy gig DVD.

The only let down is the soundtrack - especially where it becomes quite hard to hear some of the audience banter. Still, I guess you're watching the comedian and not the audience, but when a comedian interacts with the audience, it's always important that you can hear what is going on without having your ear drums thumped by the laugher and applause.

Fortunately, the 128Kbps 2.0 Dolby Digital soundtrack is more than up to the job and you can hear both Lee and the majority of the quips ("I wouldn't clean her carpet!") from the audience. It's never going to be like being there yourself, but it's as good as you're ever likely to get on this style of DVD release.

Whilst the menu is a static affair, with the tour artwork plastered across the screen, it is scored with some of the music from the show. The menu options are pretty simple too - with the option to watch the show with or without swearing or going on a behind-the-scenes tour with Lee.

The twenty-minute Behind the Scenes tour featurette takes a look at one of his gigs in Brighton. It's actually a great little featurette, even more so as Lee comes across in a very genuine and sincere manner. He talks about his television career and how quickly it could come to an end and how his "bread and butter" is his stand-up career and he likes to keep his "toe in" whilst an audience will come to see him perform. Along with getting a brief look at how the stage is set up and a run through the finale, we even get a quick look at the support act too.

The only other extra, if it can even be classed as one, is a "Non-swearing" version of the performance. You could argue that this is a very good move by Lee as he's probably more broadly known for his BBC shows Not Going Out and Would I Lie To You? - and the last thing you'll hear on those is any swearing so, when Granny decides she'd like to watch "that man off the television" do his stand-up you can be safe in the knowledge that no "naughty" words will pass his lips (well, they're actually bleeped out so you're a good lip reader it'll leave little to the imagination).

I do like Lee Mack. I'm a Northerner and so is Lee (he was born in Southport, Lancashire) so his rather mad-cap humour is very similar to mine. Just as with other Northern comedians such as Peter Kaye, Paddy McGuinness, Dave Spikey and Jason Manford, they all come across as very likeable and genuine people. It's probably one of the main reasons why they all have such a good following so, if you're a stand-up comedy fan, this disc is going to be a very enjoyable and entertaining giggle.

However, I do have an issue with this disc - and that's its running time. Whilst the actual show may be longer, at just over an hour it is far too short and more or less indicates that either Lee's show is too short, he has a lack of material (even more so when you discover that his tour includes a support act) or the filmed show wasn't really up to DVD standard. Having seen many stand-up shows from British comedy stars such as Jimmy Carr, Jack Dee and Dara Ó Briain, I'd be feeling rather short changed if I went to a show where the main act only lasted sixty minutes.

So, the comedy is great and, as his band of loyal fans well know, Lee can go off tangent with a right old ramble, please can we have much, much more of it. Sure, fans will still buy this disc without hesitation (and I just hope Lee isn't simply expecting this to be the case) but with Christmas bringing an ever more slue of releases from every stand-up comedian going, those short of content may find themselves being left on the shelf.

DVD
Based on the bestselling comic book, Vin Diesel stars as Ray Garrison, a soldier recently killed in action and brought back to life as the superhero Bloodshot, available 8th June 2020 from Sony ... END_OF_DOCUMENT_TOKEN_TO_BE_REPLACED
Latest ReviewsView