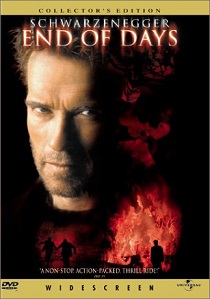 Review Article Go back to homepage
Jericho Cane is a burnt-out former New York City police officer who is assigned to security detail for a mysterious stranger. After he thwarts an assassination attempt, his subsequent investigations leads him to a beautiful, and scared, girl whose ultimate destiny involves death, the devil and the fate of mankind, and all during the final days of the 20th century.
Arnold Schwarzenegger, Gabriel Byrne, Robin Tunney, Kevin Pollak, Udo Kier, Michael O'Hagan, Rod Steiger
Action/Adventure
1
2 Hour 3 Minutes
Buy DVD
Story

Jericho Cane is a man on the edge and ready to take his own life until he is assigned to security detail for a shadowy, and successful Wall Street banker. All of his skills are called into action when an attempt is made on his assignments life. He subsequently manages to capture the would-be assassin who turns out to be a homeless priest who warns him of the impending Armageddon. Unimpressed by the priests rambling he is soon perplexed when it transpires that the priest has no tongue. How had he managed to communicate with him?

His investigations lead him to Christine, a beautiful girl who has visions of meeting a stranger and terrible visions of her death and they are starting to come true. From her birth she had been chosen as the devils wife upon his return to earth. He must consummate their marriage between 11pm and midnight on New Years eve so he can walk on the earth again and Jericho is the only man standing in his way. Will he make a deal with the devil or find his faith before it is too late?

The picture is only average to good with a varying bit-rate throughout. During the night scenes there are occasions where there is a definite outline around certain characters. Apart from this problem, the night scenes can be superb, producing some strong and vibrant colours.

The soundtrack is awesome. I don't think the rear channels were ever idle during the whole of the film. From spooky music to explosions, helicopters and atmospheric sounds it is a real treat. Again, the LFE's are abundant throughout the film with explosions and thunder used to great effect. With Universal offering Dolby and DTS on the recent Bone Collector perhaps we might be lucky enough to get a DTS version of this film, and if we do, then the subwoofer would get a serious work out!

The extras provided on the disc are also worth investigation, if only after first viewing the film. The special effects section is quite interesting highlighting some things you may have not even noticed about the devils appearance it he wandered the streets. There is also the book of revelations, which to me just appears to be a bit of filler material, but interesting enough to read if you are the God fearing type.

Gabriel Byrne now works for the 'other side'. After playing a priest in Stigmata he is now the dark lord himself hiding out in a city banker. Don't they always?! His character is brutal and cold hearted and I think I preferred his character in Stigmata. Lets just hope he doesn't get typecast. Also, why does everything evil in the world, along with disasters, massive reptiles, robberies and a 40 foot high marshmallow man always appear in New York? If there were any a reason to avoid the place then Hollywood is doing a good job!

Apart from the extremely thin story line, and if you're a fan of Arnold, then it is probably worth a purchase. However, if you fancy a similar themed film with a slightly better plot then give Stigmata a try.

3D-BD
The surviving members of the resistance face the First Order once again, and the legendary conflict between the Jedi and the Sith reaches its peak as Star Wars: The Rise of Skywalker is released on ... END_OF_DOCUMENT_TOKEN_TO_BE_REPLACED
Latest ReviewsView