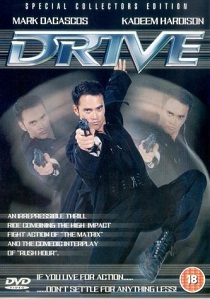 A prototype assassin with enhanced body parts to give him super quick reflexes is on the run from the Chinese mob who created him. Arriving in the USA he teams up with a reluctant by-stander and heads across America, avoiding the Chinese mob on the way, to reach a bio-tech firm before the Chinese can reclaim him. As is to be expected with Hong Kong style action films, the plot is a little thin to say the least.

With the film being made on a tight budget the picture can hardly be expected to be one of the best around. However, I was pleasantly surprised with the picture. Although it is a little washed out, and looks too much like VHS, it has an average bit-rate which increases dramatically during the action scenes.

Although the soundtrack is Dolby Digital it is very disappointing with little use of the surrounds and the dialogue can become muddled and messy at times. It was a case of cranking up the volume to hear the dialogue before diving for the volume control once the explosions and action scenes starting to give the sub a good throttling and the neighbours something to think about.

The fully animated and scored menu is something to behold. With plenty of cut scenes from the film appearing on each menu it is something which larger film companies should take note of. This also includes the amazing number of interesting extras. There's deleted scenes, a photo gallery, directors commentary with things rounded off with a 47 minute documentary. Unlike some other companies where issuing the film on DVD makes it a "Special Edition", Medusa is certainly worthy of its "Special Edition" logo here. Are you listening Paramount?

What did impress me about the time and effort put into this DVD was the fact that when various cast members spoke in Chinese the subtitles automatically appeared on the screen. So what, you may ask? Rather than just being superimposed on the picture they were actually displayed using DVD subtitle facility.

The trouble with some of the Hong Kong action films is that they tend to have bizarre plots which get totally muddled in between fight scenes. In a way 'Drive' is one of those films which quickly becomes boring until the impressively choreographed kung-fu action kicks in.

The comedy element between the two characters has a definite Rush Hour feel to it, although it fails to come anywhere near matching it. However, one shining light in the film is Brittany Murphy, of Clueless and Girl Interrupted fame, who really shows her future movie potential with an outlandish performance.

The amount of extras hardly ever seen on more high profile films, and the fact that the film was made on a shoe string budget of $3.5 million, makes this film a must purchase for all fans of Hong Kong action films.