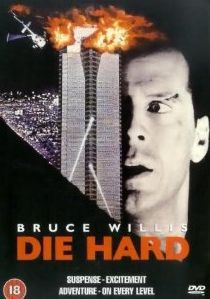 Unfortunately for John, whilst waiting for his wife to leave the company Christmas party, the building in which she works is seized by terrorists who intend to break into the massive safe and relieve it of a vast amount of cash and bonds. As the terrorist body count rises the terrorists soon realise that it's not just a collection of office staff having a booze up, but there is a professional in the building. So ensues a one man war against the terrorists to get both himself and the hostages out of the building safely and home for Christmas.

Even though the film stock is quite old, the R2 transfer is generally a good one displaying very little in the way of artifacting, plus, unlike the R1 version, is anamorphic with only a slight washed out effect to degrade it. The R1 THX is pin sharp and although not anamorphic, takes the edge over the R2 version.

The sound is what you would expect from a film of this ilk, punchy bass highlights some rather large explosions (the roof going up being a point in case), with smashing glass being another effective demonstration of how sound can enhance a film. The region 2 version has more subtitles, naturally for the European market, plus a Spanish soundtrack which, curiously, is not on the R1 version even though it manages Spanish subtitles.

It's the film that launched Bruce Willis' career from Moonlighting to the big time. Although now quite old (the credits are dated 1988) it has held up very well against a lot of would be imitators (the rather brain dead - but never the less interesting - Under Siege springs to mind). The film is in my opinion one of the best action thrillers ever made, with a great story and some excellent acting especially from Alan Rickman.

It has to be the best film in the trilogy, with the second film being the definite weakest, and indeed the start of a low point in Bruce Willis' career which wasn't to be rectified until his role in Pulp Fiction. All in all, it's a brilliant action filled and highly entertaining film given the DVD once over to fairly good effect. Let's just hope the other films in the series are treated as well as this.

It is fairly hard to recommend one disc above the other. The R1 picture is, in my opinion, better than the R2 version, although the R2 version is anamorphic. It really depends on whether you prefer your picture in an anamorphic format. However, if value for money is your game, then the R1 version has to be the standout winner as for a few extra pounds you can end up with the smart Die Hard box set.