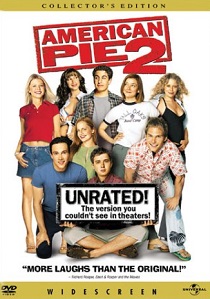 After going their separate ways in American Pie their first freshman year at college is coming to an end and they are all heading home for the summer. When most of their parties are broken up by the police for underage drinking they decide to head off the the lake and rent a house planning for a party to end all parties.

Apart from an interruption mid-stride from his father, Jim hasn't had any sex since last years party. When he discovers that Nadia will be coming to visit him at the end of summer he needs to improve his skills. With the only reference his has, he approaches Michele for some more tips.

Oz is still with his girlfriend Heather and his summer is going be made worse by the fact that she'll be spending it away in Spain with only the phone for comfort. Kevin is struggling with the fact that his previous girlfriend Vicky only wants to be friends and he's not had a relationship since last summer. After conquering Stifler's mother Finch has become obsessed with older women and he longs for meeting with her.

As for Stifler, well, he's still Stifler and his mind is as fifthly as ever. When the group decide to take up jobs to help pay for the rent they find themselves painting a house occupied by two attractive women. Stifler suspects there is something else going on and plans to expose these lesbians. However, the group are going to get a lot more action than they expected and a bigger audience.

The picture is bright and colourful with plenty of detail with no picture imperfections or dust specs right up until the last scene of the film. There's no signs of artifacting and both night and day scenes remain free of outlining and the bit-rate remains above average throughout the film.

The film comes with both DTS and Dolby Digital soundtracks. Although the film doesn't really contain any effects to flatter either sound format the DTS soundtrack gets my vote again for the field separation. The dialogue is clearly audible on both sound formats and there was no need to keep adjusting the volume control. The only time things could become a little uncomfortable was when the rock music soundtrack burst in to life.

The menu is animated and scored although whenever you move the menu cursor there was a slight delay whilst a new picture frame was loaded. This may not be too much of an issue on newer players with faster access times but I did find it a little annoying after a while.

The extras are reasonable enough although some are little pointless and smell of disc padding material. The viewers top-ten scenes and classic movie lines were just pointless. The deleted scenes and making of featurette are good enough whilst the best part of the extras are the various audio commentaries from the cast and crew. This edition of the film is the unrated version, although I can't quite see what additional footage there is. Perhaps the film was only cut in America whilst the rest of the world escaped the wrath of the censors.

The only reason why this film was made was because the cast were contractually obliged to return for a sequel. For this reason the film could have been a mess but the script and storyline was good enough to keep fans of the first film happy with Jim's Dad being hilarious in every scene he appears.

If you thought the gags couldn't get any worse then you'll be very wrong. Stand by for poor Jim experience with a porno-video and a tube of glue whilst Stifer gets peeded on. Funny as the first film? Hell yes!