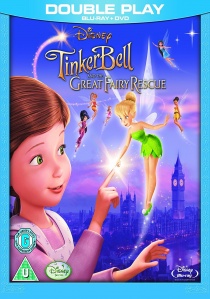 This Christmas, let Tinker Bell warm your hearts with a delightful tale of friendship and adventure as the worlds of fairies and humans meet for the first time. This all-new, original full-length CG animated film, featuring breathtaking animation, spectacular music and an all-star cast of voice talents, Tinker Bell and the Great Fairy Rescue makes its debut on Disney Blu-ray and DVD Double Play on 6th December 2010.

Before she was ever introduced to Wendy and the Lost Boys, Tinker Bell (Mae Whitman) met Lizzie, a girl with a steadfast belief in fairies. Tinker Bell and the Great Fairy Rescue takes place during the fairies' summer visit to the flowering meadows of England where two very different worlds unite for the first time, and Tink develops a special bond with a curious child in need of a friend. However, this friendship has to be kept secret from Lizzie's stern scientist father Dr Griffiths (Michael Sheen - Alice in Wonderland, The Queen) a rationalist and lepidopterist who might want to pin Tinker Bell to a card and present her to the Royal Society...

As her fellow fairies launch a daring rescue, Tinker Bell takes a huge risk, putting her own safety and the future of the fairies in jeopardy. This action-packed adventure takes the fairies of Pixie Hollow on a daring flight to London to save Tinker Bell and all of fairy kind.

Bringing this dazzling story to life are a magnificent array of characters including Lizzie, voiced by one of the UK's brightest rising stars, Lauren Mote, her skeptical scientist father Dr Griffiths, played by one of Britain's most respected actors Michael Sheen, and a magical cast of courageous fairies including Silvermist (Lucy Lui) who risk everything to bring Tinker Bell back to her home of Pixie Hollow.

Experience Disney's astonishing, all-new movie about the true power of faith and friendship. Bursting with excitement and imagination, Tinker Bell and the Great Fairy Rescue is magical entertainment for the whole family. You might even learn to fly!