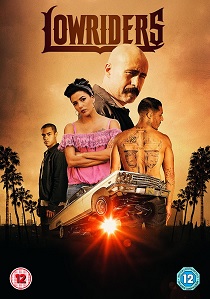 A young street artist, who uses Los Angeles as his canvas, lives his life between two worlds in the compelling and edgy story, Lowriders, arriving on DVD 28th August 2017 from Universal Pictures (UK). Buckle up and take a ride to explore the beautifully crafted and vibrant world of lowriders. The film stars Gabriel Chavarria (East Los High, Freedom Writers), who plays a young man caught in the middle of his damaged family and the persistent need of finding his own voice through art.

Lowriders comes packed with exclusive bonus features including an in-depth look into the origins of lowriders and the history behind the cool cars.

From Academy Award®-winning producer Brian Grazer and Jason Blum comes a power drama set against the vibrant backdrop of East LA's iconic car culture. Danny (Chavarria), a talented young street artist, is caught between the lowrider community inhabited by his old-school father (Bichir) and step-mother (Longoria) and following in the dangerous path of his ex-con brother (Rossi). Danny must decide between his quest for self-expression or following his family's tradition in this highly original and superbly-acted film.

Lowriders is the feature film debut from Telemundo Films, a new division from television network Telemundo, and is produced by Imagine Entertainment and BH Tilt, a division of Blumhouse Productions.

3D-BD
In Incredibles 2, released on DVD, Blu-ray and 3D Blu-ray on 12th November 2018 from Walt Disney Home Entertainment, Helen is called on to lead a campaign to bring Supers back, while Bob navigates the ... END_OF_DOCUMENT_TOKEN_TO_BE_REPLACED
Hot PicksView