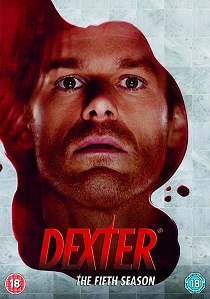 Starring Golden Globe® winner Michael C. Hall, the fifth season finds Dexter going from happily married husband to guilt-ridden single dad as he struggles to atone for the death of his wife, Rita. But when his dark secret is discovered by a woman seeking revenge against those who brutalised her, he finds a kindred spirit who may finally save-or destroy-him. Julie Stiles joins the cast for the enthralling fifth season, which also features appearances by Peter Weller, Jonny Lee Miller, Shawn Hatosy, Maria Doyle Kennedy, Katherine Moennig and Scott Grimes.

The Dexter : The Complete Fifth Season DVD is presented in Widescreen with Dolby Digital English 5.1 Surround, English 2.0 Surround, French 2.0 Stereo and Spanish Mono. The Blu-ray is presented in 1080p high definition and features English 5.1 Dolby TrueHD® (24-bit/96 kHz), which was developed for high-definition entertainment to deliver a powerful sound that is bit-for-bit identical to the original studio master, as well as French 5.1 and Spanish 2.0 Stereo Surround.

BD
Adapted from the classic novel by Charles Dickens, The Personal History Of David Copperfield, released on DVD and Blu-ray 15th June 2020 from Lionsgate Home Entertainment, brings to life one of the ... END_OF_DOCUMENT_TOKEN_TO_BE_REPLACED
Hot PicksView