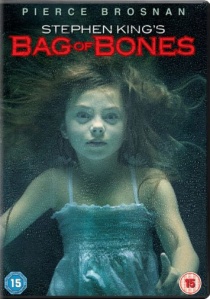 Based on the award-winning bestselling novel by Stephen King, whose work has inspired such horror classics as Carrie and The Shining, Stephen King's Bag Of Bones tells the chilling tale of novelist Mike Noonan (Brosnan) who, unable to cope with his wife's death, retreats to his family's lakeside cabin at Dark Score Lake, where he finds himself submerged in a deadly supernatural mystery.

Mystery and suspense fans can catch this epic psychological thriller in its entirety on DVD with deleted scenes that dive deeper into the mysteries of Dark Score Lake.

Bestselling novelist Mike Noonan (Brosnan) is unable to stop grieving after the sudden death of his wife Jo (Gish). Suffering from writer's block, a dream inspires him to return to the couple's lakeside retreat in western Maine. While there, Mike befriends an attractive young widow, Mattie (George) and her daughter Kyra (Carmichael) and becomes involved in a custody battle with the child's enormously wealthy grandfather, Max (Schallert).

Though his ability to write suddenly returns, Mike is plagued by ever-escalating nightmares and mysterious ghostly visitations from Sara Tidwell (Rose), a blues singer whose spirit lingers in the house. As he is haunted by the many secrets at the lake, Mike comes to realise that his late wife still has something to tell him.

UHD
Mega-action hero Liam Neeson stars as a father in search of answers after his son is mysteriously murdered in Cold Pursuit, arriving on 4K UHD, Blu-ray and DVD 24th June 2019 from StudioCanal. END_OF_DOCUMENT_TOKEN_TO_BE_REPLACED
Hot PicksView