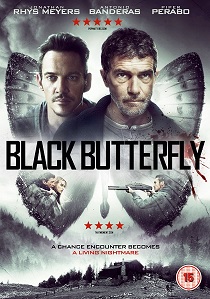 Outside a mountain town grappling with a series of abductions and murders, Paul (Antonio Banderas), a reclusive writer, struggles to start what he hopes will be a career-saving screenplay. After a tense encounter at a diner with a drifter named Jack (Jonathan Rhys Meyers), Paul offers Jack a place to stay-and soon the edgy, demanding Jack muscles his way into Paul's work and the two men begin a jagged game of one-upmanship that will bring at least one tale to an end.

Directed by Brian Goodman and written by Marc Frydman and Justin Stanley, Black Butterfly is released on DVD 4th June 2018 from 101 Films.

Related Articles
Machete Kills, Acts Of Vengeance, Unchained, Security, Knight of Cups, The 33, The Spongebob Movie: Sponge Out Of Water, Justin and the Knights of Valour, I'm So Excited, Ruby Sparks, Haywire, Puss In Boots, The Big Bang, The Skin I Live In, My Spy, The Mask of Zorro, Spy Kids, The Music of Silence, Life Itself, Pain & Glory, Dolittle
Into The Grizzly Maze, Looper, Covert Affairs: Season 2, The Lazarus Project, Because I Said So, The Prestige, The I Inside
What Doesn't Kill You
Comments
UHD Releases News Pick

UHD
Board the Millennium Falcon and journey to a galaxy far, far away in Solo: A Star Wars Story, an all-new adventure with the most beloved scoundrel in the galaxy, is released on DVD, Blu-ray, 3D Blu- ... END_OF_DOCUMENT_TOKEN_TO_BE_REPLACED
Hot PicksView