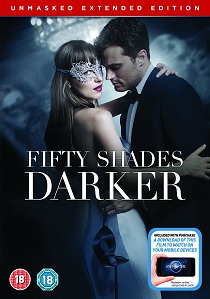 The countdown begins for one of the most highly anticipated home entertainment debuts of the year. In 50 days, Universal Pictures (UK) will unleash Fifty Shades Darker: Unmasked Edition, plunging fans even deeper into the mesmerising, hidden world of Christian Grey and Anastasia Steele, as the year's hottest romance comes home on 4K Ultra HD, Blu-ray and DVD on 26th June 2017.

The global film phenomenon sparked by E.L. James' best-selling book trilogy returns with the second chapter of the darkly alluring tale that captivated the world. Fans can now stay in and have the ultimate at-home movie night with Fifty Shades Darker: Unmasked Edition, and this time, there are no rules and no secrets.

When a wounded Christian Grey (Jamie Dornan, The Fall, Anthropoid) tries to entice a cautious Anastasia Steele (Dakota Johnson, How to Be Single, Black Mass) back into his life, she demands a new arrangement before she will give him another chance. As the two begin to build trust and find stability, shadowy figures from Christian's past start to circle the couple. Jack Hyde (Eric Johnson, The Knick, Smallville) and Elena Lincoln (Kim Basinger, L.A. Confidential, 9 ½ Weeks) intensify the story, determined to destroy the couple's hopes for a future together.

In addition to both the original theatrical version and a steamy new unrated version with over 13 minutes of footage not seen in theaters, Fifty Shades Darker: Unmasked Edition on 4K Ultra HD, Blu-ray and DVD comes with more than 30 minutes of never-before-seen bonus content, including cast interviews, behind-the-scenes features, and a peek at what lies ahead in the upcoming Fifty Shades Freed!