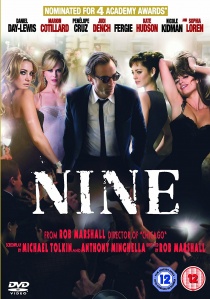 Daniel Day-Lewis, Nicole Kidman, Penelope Cruz, Judi Dench and Sophia Loren head the stellar cast of Nine, the dazzling musical based on the award winning hit Broadway production of the same name which in turn was inspired by Federico Fellini's Oscar-winning film masterpiece 8½ is now being released by Entertainment in Video on rental DVD retail DVD and Blu-ray on 19th April 2010.

Nine the movie, directed by Rob Marshall who was also responsible for the sensational big screen adaptation of Chicago, is a daring and inspirational re-working of the Broadway show. It is the story of world-famous fictional film director Guido Contini (Daniel Day-Lewis - My Left Foot, There Will Be Blood, Gangs of New York) whose career and overcrowded love life simultaneously go into freefall when he suddenly hits an epic mid-life crisis.

In just over a week he's due to start shooting his next film at the renowned Cinecitta film studio but he's creatively paralysed and has no idea what to shoot. The women in his life who have provided him with so much inspiration in the past now seem to be draining him with their constant demands and fuelling his demons without even realizing.

The other women in his life, past and present, also start adding to his problems  his muse Claudia (Nicole Kidman  Moulin Rouge, The Golden Compass, The Hours), his costume designer and confidante Lilli (Judi Dench - Quantam of Solace; Tea With Mussolini; Mrs Brown), a feisty journalist from Vogue (Kate Hudson - Almost Famous; How To Lose A Guy In 10 Days; You, Me & Dupree), an instructive hooker from his childhood (Stacy Ferguson  Fergie from the Black Eyed Peas) and his beloved Mama (Sophia Loren).

As his life unravels still further out of control, he desperately seeks to re-gain his emotional strength and creative genius to enable him to start work on the new movie.

BD
Adapted from the classic novel by Charles Dickens, The Personal History Of David Copperfield, released on DVD and Blu-ray 15th June 2020 from Lionsgate Home Entertainment, brings to life one of the ... END_OF_DOCUMENT_TOKEN_TO_BE_REPLACED
Hot PicksView