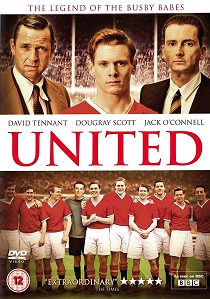 United tells the gripping story of how one team's devastating loss in Munich inspired a community to rise up and bring back the glory that is Manchester United. Based on the true story of Manchester United's celebrated "Busby Babes", the youngest side ever to win the Football League and the 1958 Munich air crash that claimed eight of their number.

Released on DVD from 8th August 2011, Revolver Entertainment will bring youback to post war era when the inspiration of a nation laid on the hands' of heart throbs "Busby Babes".

By 1958 the Babes are riding high on the crest of a wave until the scheduling of aEuropean Cup Tie in Belgrade demands that Busby charter a special flight to return the team to Manchester in time for Saturday's kick off. During a refuelling stop at Munich airport, the arctic weather closes in. On a third attempt at take off, the plane never leaves the ground crashing into a fuel dump. Twenty three people on board the aircraft die as a result of their injuries, including eight of the Busby Babes...

The disaster sends shockwaves around the world. While Manchester mourns its sporting heroes, the surviving players are devastated, unsure whether they will ever play again. Critically injured, Busby is riddled with guilt about his decision to charter the plane and with no insurance on the players, the powerhouse that was Manchester United seems doomed.

With its superbly talented cast and powerful script drawn from first hand interviews with survivors and their families, United tells how the extraordinary spirit of a community rebuilt the team in the aftermath of the crash, providing a powerful tribute to a tragedy that spurred the beginning of the global legend that is Manchester United.