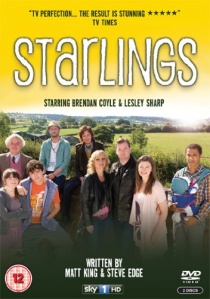 Starlings follows the lives of the Starlings family, a typical working class family living in a detached house in Matlock, Derbyshire. Grandad (Alan Williams, Luther) has recently moved in, following a rabble rousing incident at the old folks' home. Rather than see him unhappy, his son Terry (Coyle) and wife Jan (Sharp), decide to put him up in their already crammed family home.

Then there's Bell's ex-boyfriend, Reuben (Ukweli Roach, Eternal Law) desperate to get back together with her. Uncle Loz (King), Grandad's long lost son, is the artist of the family. Last but not least, Jan's nephew, Fergie (Edge) who offers to bivouac in the garden, after being made homeless when his long suffering partner chucks him out.

Matt King commented: "Steve Edge and I set out to write a comedy drama that was completely lacking in anything bleak, anything cynical... We just wanted to write something really uplifting, funny and warm and about a family: a real family".

Brendan Coyle added: "This is something very, very different... It's rooted in a source of truth: it's a family, we're playing it for real. We all get on, we all like each other - there's a familiarity and an ease between us, which is really going to play on screen".