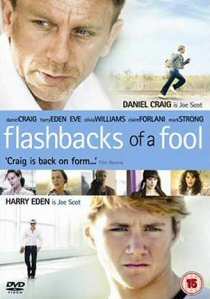 Daniel Craig (Enduring Love, Munich, Casino Royale) stars as a washed-up Hollywood heartthrob in Flashbacks of a Fool, a moving psychological drama, out to own on DVD on 18th August 2008 from Walt Disney Home Entertainment.

Craig, who also takes on his first production role in the film as executive producer, plays fading star Joe Scott who in a downward spiral of sex, drink and drugs returns to his English roots to fully confront his fateful past.

Beautifully shot by British director Baillie Walsh - the mastermind behind music videos for Bjork and Massive Attack among others - a series of flashbacks transport the audience from Scott's debauched lifestyle in modern day Hollywood to a glam-rock enthused summer of his childhood in 1970s England. Here, the fifteen year old Joe, played by talented newcomer Harry Eden, goes on a tragic journey of sexual and emotional discovery that will shape his life forever.

Set to a glam-rock 70s soundtrack including classic tracks from Roxy Music, David Bowie and Scott Walker, the story sees young Joe fall for teenage beauty Ruth (Felicity Jones) only to be seduced by married neighbour Evelyn (Jodhi May), with tragic consequences.