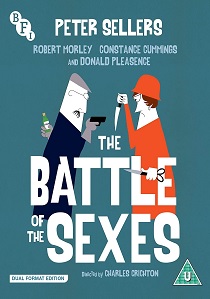 News Article Go back to homepage
Starring Peter Sellers as an accountant who devises a plan to save his company from the effects of an American takeover, the classic British comedy The Battle Of The Sexes is released on dual-format DVD and Blu-ray 20th April 2020 from BFI.
Peter Sellers, Robert Morley, Constance Cummings, Jameson Clark, Donald Pleasence
Charles Crichton
Monja Danischewsky
Bfi
1 hour 24 minutes
20/04/2020
#TheBattleOfTheSexes
Buy DVD
Buy BD
Information

When American businesswoman Angela Barrows (Constance Cummings) is sent by her company to Edinburgh to look into potential export markets, she meets Robert MacPherson (Robert Morley), a company manager who has just inherited his father's textile business and wants her advice on updating it to modern standards.

Before long Angela is introducing all sorts of new-fangled ideas and the employees, scandalised that they have to work under a female boss, turn to Mr Martin (Peter Sellers), who promises to lead the fight against the interloper.

The Battle Of The Sexes is released on dual-format DVD and Blu-ray 20th April 2020 from BFI.