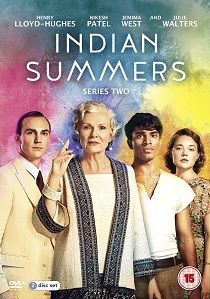 The inimitable Julie Walters reprises her role of manipulative doyenne of high society Cynthia Coffin, alongside returning cast Henry Lloyd Hughes (The Inbetweeners), as Ralph Whelan, the charming Private Secretary with a chequered past, Jemima West (The Mortal Instruments: City of Bones), as Alice, Ralph's younger sister and Nikesh Patel (Bedlam), as Aafrin Dalal, a rising star in the Indian civil service and Alice's true love.

The year is 1935 and three years have passed. As the seasons turn, so too do the machinations of a rising revolution and as a new summer falls upon the foothills of India's Little England, Simla, political tensions reach fever point.

For Ralph Whelan, this year is the most pivotal of his career but with the Viceroy incumbent in his final few months he struggles to finance his career progression and continue to conceal the truth surrounding the events of 1932. Alice's husband has followed her to India but his worsening campaign of hatred against his wife sends her running into the arms of Aafrin Dalal.

The Dalals are enjoying the newfound status that Aafrin's ascending career affords them but it will not be an easy summer and Aafrin is even more deeply involved with the violent wing of the Congress Party.

Against this backdrop, life in Simla continues, as fun and debauched as ever. Cynthia still reigns supreme as the society queen, but even she cannot deny that British rule is fading in the sub-continent while Ralph, Alice and Aafrin face a great reckoning of their own.

Temperatures are rising in this unmissable sizzling saga.