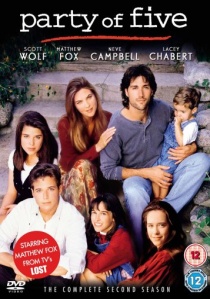 The second season of the celebrated coming-of-age drama, Party of Five, will be available to buy in a 6 disc DVD box set, featuring all 22 episodes from 3rd September 2007, courtesy of Sony Pictures Home Entertainment.

This perennially popular teen show features a sexy young cast of then up-and-coming stars, including the hunky star of TV's Lost and the forthcoming big screen thriller Vantage Point, Matthew Fox. Neve Campbell (Scream Trilogy), Scott Wolf (Go) and Lacey Chabert (Mean Girls) make up the rest of the Salinger family, with Season 2 also marking the arrival of Jennifer Love Hewitt (I Know What You Did Last Summer, Ghost Whisperer) to the series.

Season 2 continues the story of the Salinger family as they struggle to keep themselves together following the tragic loss of both of their parents. With cancelled weddings, thwarted college plans and unwanted pregnancies numbering just some of the challenges thrown at them, the family have never needed one another more.

Season 2 also features the life-changing, two-part season finale which sees the family facing the potential loss of the family restaurant. This long-running series was a global ratings phenomenon during the 90's, paving the way not only for the glittering careers of its cast but also for the arrival of other teen hits like Dawson's Creek and The O.C.