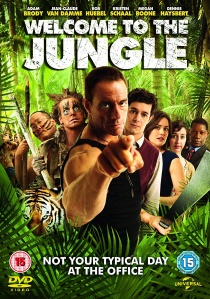 International action star Jean-Claude Van Damme unleashes his outrageously funny inner beast in Welcome to the Jungle, a side-splitting journey into the wilderness coming to Blu-ray and DVD on 4th August 2014 from Universal Pictures UK.

An ad agency experiencing some financial difficulty sends its workers on a leadership and team-building exercise on a tropical island. The exercise, which is run by ex-military man Storm Rothschild (Van Damme), if not a success, will result in some of those employees losing their jobs. As the group then become stranded and forced to fend for themselves on the island, opportunistic Phil (Rob Huebel) asserts his influence over some of the group and splits the island into two camps. Phil's camp soon revert to a savage and lawless state of nature while the others, led by Chris (Brody), an ambitious young worker, strive to maintain order, as well as their sanity.

BD
The surviving members of the resistance face the First Order once again, and the legendary conflict between the Jedi and the Sith reaches its peak as Star Wars: The Rise of Skywalker is released on ... END_OF_DOCUMENT_TOKEN_TO_BE_REPLACED
Hot PicksView