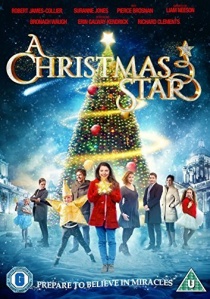 This Christmas, prepare to believe in miracles as Belfast-based children's charity Cinemagic and Signature Entertainment present A Christmas Star, released on DVD and Blu-Ray from 23rd November 2015.

Staring film and TV's elite, A Christmas Star tells the heartwarming story of Noel, a spirited young who embarks on a magical journey to save her friends and family. Newcomer Erin Galway-Kendrick and a host of actors including Pierce Brosnan (James Bond), Suranne Jones (TV's Scott & Bailey, Doctor Foster), Robert James-Collier (TV's Downton Abbey, Coronation Street), Bronagh Waugh (Hollyoaks, The Fall), and Richard Clements (A Belfast Story). The film is narrated by Liam Neeson (Taken, A Walk Among The Tombstones) and features a cameo from Kylie Minogue and guest appearance from Dermot O'Leary.

Born in dramatic circumstances under the Christmas Star, Noel believes she has the gift to perform strange miracles. When conniving developer McKerrod threatens her peaceful life she teams up with a misfit gang of local kids to save the village from demolition. However, one by one her friends lose faith in Noelle's abilities and she is left to fight McKerrod on her own. The town's future hinges on a final showdown in Belfast's historic Stormont building as Noelle implores politicians, her friends and the watching world to believe in the true meaning of Christmas... love.

To celebrate its 25th Anniversary Year, Cinemagic embarked on it's most ambitious project to date, to produce Northern Ireland's and Ireland's first Christmas feature film, A Christmas Star.

Cinemagic patron and Oscar-winning writer, Julian Fellowes, said: "I am proud to be associated with the fantastic work that Cinemagic has been delivering for twenty five years. We are told on every side that it's time to lower barriers and cross frontiers and this is exactly what Cinemagic is doing." He added: "Young people, from every type of background and culture, are being encouraged to explore the world of film for themselves, first hand. We want them to break through the glass ceilings and walls that surround them, and see for themselves what it's really like. Whether or not they continue to live or work in the Arts, there can surely be no better preparation for seeking and finding the right life."

Cinemagic Chief Executive, Joan Burney Keatings, MBE said: "Our Christmas feature film has brought young people from different cultural backgrounds together, and representatives from the worlds of film, television and music collaborated to celebrate creativity and highlights the importance of developing young people's skills and offering them unique film and television related opportunities. We are enormously proud and excited to bring this to cinemas nationwide for all the family to enjoy this Christmas."