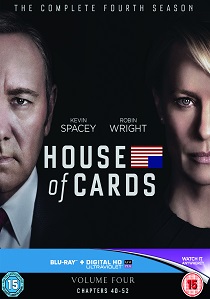 The critically acclaimed, politically charged drama House of Cards: The Complete Season 4 arrives on Blu-ray and DVD 4th July 2016 from Sony Pictures Home Entertainment. Two-time Academy Award® winner Kevin Spacey (American Beauty, Best Actor in a Leading Role, 1999; The Usual Suspects, Best Actor in a Supporting Role; 1995) returns as Frank Underwood alongside Robin Wright in her Golden Globe Award® winning role as his wife, Claire Underwood. Season Four reveals even more of the dark twisted underbelly of politics as the Underwood's continue their pursuit of power, battling everyone in their way, including each other.

DVD
Quiz, the extraordinary and sensational story of how Charles and Diana Ingram attempted an 'audacious heist' on the quiz show 'Who Wants to Be a Millionaire?', is available to buy on DVD on 15th June ... END_OF_DOCUMENT_TOKEN_TO_BE_REPLACED
Hot PicksView