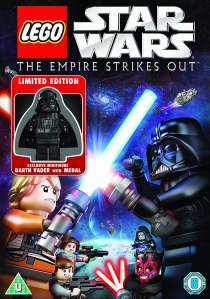 The LEGO Group and Lucasfilm announced today that LEGO Star Wars: The Empire Strikes Out will release on DVD on 18th March 2013 in the UK.

Your favorite characters are back to save the galaxy in LEGO Star Wars: The Empire Strikes Out. The heroes of the Rebel Alliance including heroic Luke Skywalker, swaggering Han Solo and steadfast Princess Leia have no time to celebrate their victory over the Empire as a new Imperial threat arises.

But as Jedi-in training Luke embarks on this next mission, he discovers that his celebrity status as a "Death-Star-Blower-Upper" can be a double-edged lightsaber when he's constantly mobbed by crazed fans. So much for secret missions! Meanwhile, Darth Vader and Darth Maul are locked in a hilarious "Sith-ling" rivalry as they compete for the Emperor's approval. It's an action-packed comic adventure that's out of this world!

Related Articles
Mariah Carey's All I Want for Christmas is You
We Still Steal The Old Way, Airborne, Quatermass and the Pit, For Your Eyes Only
Much Ado about Nothing, Game Of Swords, Tarzan, Robin Hood: The Rebellion, Flash Gordon: 40th Anniversary
The Lego Movie, Star Wars : The Clone Wars, Star Wars: The Rise of Skywalker
My Son, My Son, What Have Ye Done
Comments
UHD Releases News Pick

UHD
Board the Millennium Falcon and journey to a galaxy far, far away in Solo: A Star Wars Story, an all-new adventure with the most beloved scoundrel in the galaxy, is released on DVD, Blu-ray, 3D Blu- ... END_OF_DOCUMENT_TOKEN_TO_BE_REPLACED
Hot PicksView