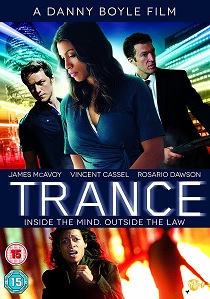 Danny Boyle's hypnotic and mind-bending action thriller Trance is released on DigitalHDT, Blu-ray and DVD this Summer from Pathé Productions Ltd. Fractured realities, twisted truths and devious betrayal bring to light a mesh of forgotten dark pasts and warped nostalgia in this masterful assault on the senses.

The Oscar-winning director of Trainspotting and Slumdog Millionaire and the triumphant Olympic Opening Ceremony returns with this adrenalised psychological and darkly comic, film noir about a fine art auctioneer Simon (James McAvoy: Atonement, X-Men First Class) mixed up with an underworld criminal gang.

After attempting to swindle gang leader Franck (Vincent Cassel:Black Swan, Mesrine) during a botched heist, Simon suffers a blow to the head and loses his memory, including the location of where he has hidden the precious painting. In desperation Franck takes Simon hostage before enlisting the help of sultry hypnotherapist Elizabeth Lamb (Rosario Dawson, Seven Pounds, Sin City) to unlock Simon's unconscious and trace where the art is stashed.

Frantic mind games and a hazardous love triangle result in ever shifting manipulative motives as the unknown jerks in and out of a hazy, distorted reality where very little is what it seems. Trance transfixes you in to a flurry of hallucinatory thrill and both sexy and violent veracity that will leave you guessing until the thrilling finale.

Trance is an unforgettable experience that warrants repeat viewing when it is released on DigitalHDT on 22nd July 2013 & on Blu-ray and DVD from 5th August 2013.