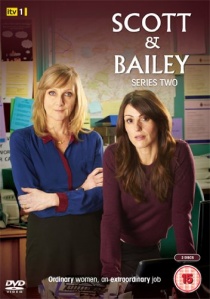 Each episode sees the women juggle complex home lives with their day job - solving serious crimes. In this series Janet and Rachel deal with the brutal murders of two men. At the same time, Janet splits with her husband and struggles to run her family without his support. Rachel is invited to work on a high profile case with her boss DCI Gill Murray. Elsewhere, Rachel's wayward brother turns up on her doorstep.

Can Rachel trust him? Honest, powerful and true to life, Scott & Bailey is a refreshing take on crime drama.

Episode 1 - In the first of a two-part story, the badly burned body of a disabled man turns up in a remote part of Manchester and a few days later another corpse is discovered. The detectives start to realise the victims were not just murdered, but tortured too. They make an arrest, but it becomes clear their investigation has just scratched the surface. Meanwhile, Janet throws her husband out and Rachel's estranged brother turns up on her doorstep.

Episode 2 - The team finally break down the wall of silence maintained by their four murder suspects and uncover the shockingly banal truth behind the killings. Meanwhile, Rachel cannot fight her attraction to Sean - but will she regret her actions? Janet tries to keep her private life secret, but Taisie spills the beans to Andy at Rachel's birthday celebrations.

Episode 3 - Gill and Rachel go to Bristol to advise on a rape and murder case which bears striking similarities to an infamous case from 13 years ago. At the time of the original investigation, Gill helped catch the perpetrator, Jeremy Leach. Leach was convicted for the rape and murder of four women but now he is claiming that he is innocent. Another woman has been raped and killed using Leach's exact MO - could the real murderer still be out there?

Episode 4 - The team investigate when the body of an eight-year-old boy is discovered but, as they search for the paedophile killer, they are unaware that the culprit has placed himself at the heart of the child's grieving family. Dom's HIV test is negative, but in his relief he does something stupid which jeopardises Rachel's sergeant's exam. Sean thinks that he and Rachel are destined to be together, although she is not convinced. Janet is persuaded to give things a go with Andy, but finds herself having doubts.

Episode 5 - Rachel is angry and upset about missing her sergeant's exam and about Nick Savage not being charged with her attempted murder. Sean tells her he has booked the registry office and, even though she still says no, his relentless cheerfulness makes her smile. Andy insists that he is prepared to give Janet all the time and space she needs, but then she gets home to find him already there, ingratiating himself with her mother and Elise. In an interview with Geoff Hastings, Janet learns much more than she bargained for. Rachel and the rest of the team investigate the brutal, racially motivated murder of a 21-year-old taxi driver.

Episode 6 - The team investigate the murder of a sexily dressed woman with a green head. Gill suspects that the woman's lover may be responsible - but there is no shortage of suspects. Meanwhile, Janet confides in Gill about Andy's behaviour and Rachel struggles with Sean's latest surprise - he has a son.

Episode 7 - Sean surprises Rachel when he tells her that he has been in contact with her estranged mother, who would love to see her. Unable to accept that Janet has ended their affair, Andy punishes her by keeping her out of the heart of the investigation - which leads to a painful row. Meanwhile, the team look into the murder of Leon Foster. At first, Leon's death looks like a typical gang killing, but the discovery that he was sexually mutilated raises suspicions that this could be a domestic murder.

Episode 8 - A hungover Rachel learns that Nick Savage has been brutally assaulted - and that she is top of the list of suspects. Scared and unable to remember what happened, she struggles to convince herself that she did not do it. Thinking that she has made her peace with Andy, Janet is shocked to discover that he has given her misinformation which causes Gill to miss an appointment with the coroner. Unable to find out who is messing her around, Gill tells Janet and Andy that one of them will have to leave the syndicate. Gill is forced to re-open an accidental death case when she learns that the dead man's wife often talked about killing him.