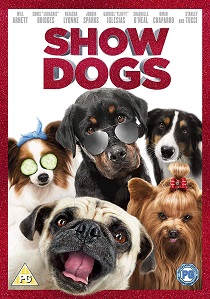 News Article Go back to homepage
Show Dogs, released on DVD and Blu-ray 1st October 2018 from Entertainment One, is a family comedy about the unlikely pairing of a human detective and his canine partner who has to go undercover at the world's most exclusive dog show to solve his biggest case yet.
Will Arnett, Chris Bridges, Natasha Lyonne, Jordin Sparks, Gabriel Iglesias, Shaquille O'Neal
Raja Gosnell
Deepak Nayar, Philip von Alvensleben
Entertainment One
1 hour 30 minutes
01/10/2018
#ShowDogs
Buy DVD
Buy BD
Information

Max, a loner Rottweiler, lives in a world of sentient dogs. Max has a job as a police dog with a human partner named Frank. They receive orders to go undercover at the world's most exclusive dog show to try to find evidence that the show is a front for rare and exotic animal smuggling. A baby panda has also been stolen and awaits in a cage for someone to save it before its shipped out of the country and lost forever.

Max knows how to be macho. He has a license to bite. With this show, he must learn to be a lot more and to appreciate the help he receives from both his partner and other dogs if he's going to save the day.