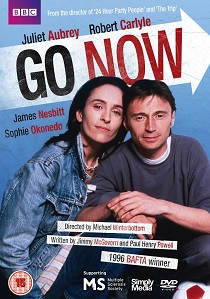 News Article Go back to homepage
Highlighting the impact multiple sclerosis has on a young sportsman and his loved ones, Go Now is a heart-wrenching, intense film from 1995, and it comes to DVD 20 years after it was originally broadcast by the BBC, courtesy of Simply Media on 12th September 2016.
Robert Carlyle, Juliet Aubrey, James Nesbitt, Sophie Okonedo
Michael Winterbottom
Simply Media
1 hour 21 minutes
12/09/2016
#GoNow
Buy DVD
Information

Multiple sclerosis (MS) is a neurological condition which affects around 100,000 people in the UK. Highlighting the impact multiple sclerosis has on a young sportsman and his loved ones, Go Now is a heart-wrenching, intense and unforgettable film from 1995, and it comes to DVD 20 years after it was originally broadcast by the BBC, courtesy of Simply Media.

Starring an outstanding cast with Robert Carlyle (Trainspotting) in the lead role, directed by BAFTA winner Michael Winterbottom (The Trip) and written by the multi-award-winning Jimmy McGovern (The Street) and Paul Henry Powell (The Vice). The BAFTA winning film arrives on DVD 12th September 2016, accompanied by an exclusive special feature with footballer Danny Wallace talking about his own experiences suffering with MS. Simply Media is collaborating with The MS Society UK and will be donating £1 per DVD sold to the charity.

Construction worker and keen amateur footballer Nick Cameron (Carlyle) has the best of everything when he meets and moves in with soulmate Karen (Juliet Aubrey - The Constant Gardener). But complications arise when symptoms of a mysterious illness including numbness and double vision begin to sap his energy. As MS sets in, his physical powers quickly diminish and he loses his job, his sport and his sexual drive.

Eroded by frustration, anger and self-pity, Nick lashes out at Karen, even accusing her of sleeping with her boss. At his lowest ebb, summoning vestiges of pride and self-sacrifice, Nick urges Karen to leave him. Will she accept an easy escape from his despondency and rancour, or stand by this frail shell of the man she fell in love with?

Blending raw emotion with laddish dark humour, Go Now was originally broadcast on the BBC in 1995 and won a BAFTA for Best Editing and writers Jimmy McGovern and Paul Henry Powell - who drew on his own experiences battling MS - shared the Royal Television Society's Best Writer award.

Related Articles
Born Equal, Once Upon A Time: Season 3, Stargate Universe: Season 2, Flood: 2 Disc Extended Edition, 28 Weeks Later, Eragon, The Beach, Once Upon a Time in The Midlands, The World is not Enough, Once Upon A Time: Season 7, The War of the Worlds, COBRA
Cold Feet: Series 7, Lucky Man: Series 2, Stan Lee's Lucky Man: Series 1, Cold Feet: Series 6, The Secret, The Hobbit: The Desolation of Smaug, The Missing, Gold, The Way, Monroe, Outcast, Blessed, Cold Feet: Series 8, Cold Feet: Series 9
The Trip To Spain, The Face Of An Angel, The Trip To Italy, The Look of Love, Family, The Trip, The Trip To Greece, Greed
Primeval: Series 5, Primeval: Series 4, F
Undercover, The Escape Artist, After Earth, The Secret Life of Bees, The Secret Life of Bees, Christopher Robin, Flack, Chimerica, Wild Rose, Flack: Series 2
Comments
UHD Releases News Pick

UHD
Phil Lord and Christopher Miller, the creative minds behind The Lego Movie and 21 Jump Street, bring their unique sensibilities to a fresh version of a different Spider-Man Universe with Spider-Man: ... END_OF_DOCUMENT_TOKEN_TO_BE_REPLACED
Hot PicksView