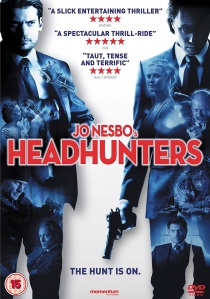 The hunt is on, as Momentum Pictures releases the critically aclaimed box office smash thriller Jo Nesbø's Headhunters on Blu-ray, DVD and to Download on 13th August 2012.

Starring Nikolaj Coster-Waldau (Black Hawk Down) from HBO's epic series Game of Thrones, Aksel Hennie (Max Manus: Man of War, Age of Heroes) and Julie R. Ølgaard (The Killing), this hard-hitting thriller is one of the most talked about of the year, garnering widespread critical acclaim and word of mouth praise becoming the highest grossing foreign-language film of 2012 so far. The Times described it as "fast paced and amusingly gruesome" and the Daily Express called it "fiendish and ferociously entertaining".

From the producers of the original The Girl with the Dragon Tattoo and Wallander, this is the first of international best-selling norwegian author Jo Nesbø's novels (The Snowman, The Leopard), to be adapted for the screen and is expertly directed by Morten Tyldum (Buddy, Fallen Angels) into a cool, brutal thriller. Much like the Girl trilogy, there is an American remake in the works which has a lot to live up to.

In Headhunters, Roger Brown (Hennie) seems to have it all, an exceedingly beautiful wife and a luxurious villa and is a high flying, successful corporate headhunter. He's the best in the business and he knows it.

So when Brown discovers his latest candidate, the accomplished and handsome Clas Greve (Coster-Waldau) owns one of the most sought after paintings in the world, he sees a way out of his financial problems for good and embarks on his most dangerous heist yet.

But nothing could prepare Brown for what he finds in Greve's apartment and what follows is a dark and relentless game of cat and mouse, as the hunter becomes the hunted. But one career is not enough to fund Brown's extravagant lifestyle and he becomes embroiled in high profile theft on the side, relieving his wealthy new recruits of their valuable artwork