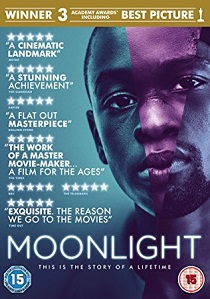 The Oscar®-nominated, mesmerising, and heartbreakingly beautiful film, Moonlight, arrives on Blu-ray and DVD on 19th June 2016 from Altitude Film Distribution.

Written and directed by Barry Jenkins and based on Tarell Alvin McCraney's autobiographical play In Moonlight Black Boys Look Blue, the film chronicles the life of Chiron, a boy growing up in a rough neighbourhood of Miami, Florida. At once a vital portrait of contemporary African American life and an intensely personal and poetic meditation on identity, family, friendship, and love, Moonlight is a groundbreaking piece of cinema that reverberates with deep compassion and universal truths.

Moonlight has won the Golden Globe® for Best Picture - Drama and was nominated for an additional five Golden Globes®. The critically acclaimed film was also nominated for three Screen Actors Guild Awards and five Independent Spirit Awards, and additionally was the s recipient of the Spirits' Robert Altman Award, which honours an outstanding ensemble cast in a motion picture. Moonlight was been named the Best Picture of 2016 by the Gotham Awards, the Los Angeles Film Critics Association, The National Society of Film Critics, and The New York Times.

A timeless story of human connection and self-discovery, Moonlight chronicles the life of a young black man from childhood to adulthood as he struggles to find his place in the world while growing up in a rough neighborhood of Miami. Anchored by extraordinary performances from a tremendous ensemble cast, Moonlight is profoundly moving portrayal of the moments, people, and unknowable forces that shape our lives and make us who we are.

The Moonlight Blu-ray and DVD release special features include audio commentary with director Barry Jenkins and three featurettes looking behind the scenes at the making of the film as well as a deeper dive into the music and locations featured in the film.

BD
You ever hear the one about the cop, the blonde, the psycho and the mafia princess? Birds Of Prey And the Fantabulous Emancipation of One Harley Quinn, coming to DVD, Blu-ray and 4K UHD 20th June 2020 ... END_OF_DOCUMENT_TOKEN_TO_BE_REPLACED
Hot PicksView